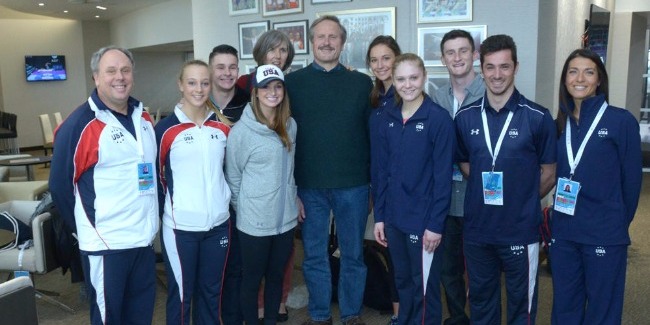 “The USA gymnasts said that gymnastics arenas in the USA cannot be compared to the one in Baku,” the USA ambassador to Azerbaijan Robert Cekuta told Trend News Agency following the meeting with members of the USA delegation at the FIG World Cup in Trampoline Gymnastics in Baku.

The ambassador noted that he is attending the gymnastics event for the first time.

“For now, I’m just studying this sport. I watched competitions in gymnastics on TV many years ago but it is quite a different feeling to watch the tournament live. I already feel how I am becoming a fan of this sport discipline. In general, one of the main peculiarities of my job is to discover and do new things that I have never done before. I saw both during the First European Games and today how sport is important in Azerbaijan in real life,” Cekuta said.

According to him, he was very impressed by how the Azerbaijanis themselves, volunteers, the youth represent their country and how they are proud of that. The ambassador noted that he even talked about this matter with First Lady of Azerbaijan Mehriban Aliyeva.

He further shared his impressions of the USA gymnasts and delegation members at the FIG World Cup in Trampoline Gymnastics in Baku.

“They told me that they hadn’t seen such an arena before. It was built especially for gymnasts. There are many arenas in the USA, even small facilities in towns, but none of them are comparable to the one in Baku. The USA delegation is very content with the organization of the tournament. They informed that they felt like being at the major events, such as the World Championships but not World Cup series,” Cekuta underlined.