AGF Vice-president Altay Hasanov: Baku turns out to be sports capital of region 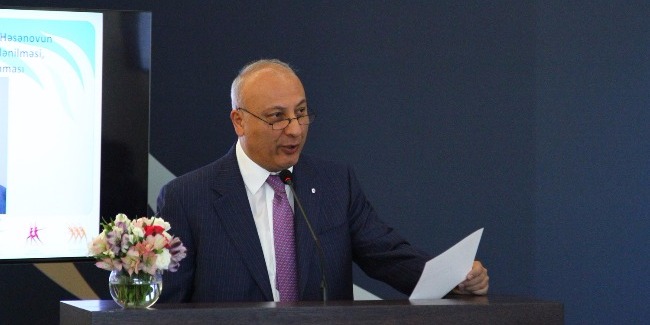 AGF Vice-president Altay Hasanov: Baku turns out to be sports capital of region

“The FIG World Challenge Cup in Artistic Gymnastics to be commenced on February 19 is being held in Azerbaijan for the first time,” Vice-president of Azerbaijan Gymnastics Federation Altay Hasanov told the Trend News Agency on February 18.

According to him, it is a very significant Cup in terms of the status. Competitions of this kind is held only in three countries of the world in this Olympic year - UK, Japan and Azerbaijan.

He noted that therefore, its is expected from Azerbaijan to hold the competitions at a high level from the organizational point of view as usual.

Hasanov added that today's Orientation Meeting with the heads and representatives of the delegations, which have arrived in Baku for the FIG World Challenge Cup also proved it as the participants had practically no questions.

“It also shows that the Federation and the Local Organizing Committee are very well prepared,” he said.

Hasanov further said that the Federation expects good performance from the Azerbaijani athletes.

“It is just the beginning of the season. Our most important event is obviously the Olympic Games in Rio. Holding competitions in Baku is a good factor in itself. Because, it is not always easy for the athletes to perform at home, as it requires high responsibility. Thereforeit is good for themvto have such a test prior to more important cpompetitions, such as the European Championships and Olympic Games,” he said.

The AGF Vice-president also noted that given the country’s experience in hosting major competitions in Rhythmic Gymnastics, holding the World Challenge Cup in Artistic Gymnastics in Baku could bring great advantages.

“We gain experience, our athletes compete with the world’s leading gymnasts who come to Baku with great pleasure. It has long been no secret that Baku is turning to be a sports capital of the region, since the city hosts competitions and meets guests at a very good level,” Hasanov said.

He emphasized his belief that all guests leave the country satisfied.

AGF vice-president further expressed his confidence that the athletes and representatives of delegations, who have arrived in Baku, will leave the country, with positive emotions as always.