ALIYA GARAYEVA: “I REALIZED THAT I HAD WON “BRONZE” WHEN I SAW THE NUMBER 3 IN FRONT OF MY SURNAME ON THE SCOREBOARD” 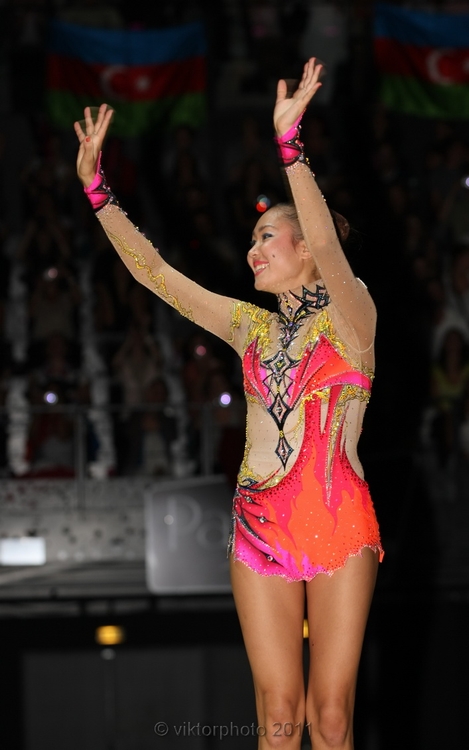 Express interview with a bronze medalist of the Rhythmic Gymnastics World Championships in the all-around Aliya Garayeva.

“Aliya, we congratulate you on the medal and Olympic license!”

“Thank you! To be honest, it was very difficult at this championship, I mean, emotionally difficult. In comparison with the last year’s championship in Moscow, the heat of the competition was much higher. And it was natural as we were competing not only for the medals but for the licenses as well!” “A year ago, I was contending the awards with a Belarusian Melitina Stanyuta in the all-around and I lost only 0.05 to her, and, now, I have succeeded and I am very happy!” “My last performance with a ribbon turned out to be the best and the judges appreciated it at its true value and I received 28.45 points!”

“But there was a “swing” here in Montpellier as well…”

“Yes, you are right. After the first apparatus, I was the 4th, after the second one – the 6th, after the third one – the 4th. And, then, a Bulgarian Silvia Miteva, who is undoubtedly a very strong gymnast, and, who was leaving me behind in the course of the whole distance, dropped the hoop outside the limits of the floor and I took advantage of it.”

“When did you realize that you became the bronze medalist in the all-around?”

“I could not have believed that I won the “bronze” until I saw the number 3 in front of my surname on the scoreboard, and, I interiorly said “Well done, Alya”!”

“Will this medal have a special place in your collection now?”

“Of course, it is valued much higher than medals for separate apparatus as it was acquired in the Olympic category! I wish to repeat this success at the Games-2012 in London. Though I do not want to guess at the future, it is necessary to train hard and a lot, and, Inshallah, everything will be all right!. I express my thanks to all the coaches and specialists who prepared me for the championship, as well as to the fans who tirelessly supported me and to my Federation headed by Mrs Mehriban Aliyeva who is doing everything for the development of our sports discipline.”

“What are you going to do on the championship’s remaining days?”

“I will support our group team’s gymnast who start their performances today, and, then, will have a holiday!”