ALIYA GARAYEVA: “WE HAVE SHOWN WHAT AZERBAIJAN IS CAPABLE TO DO” 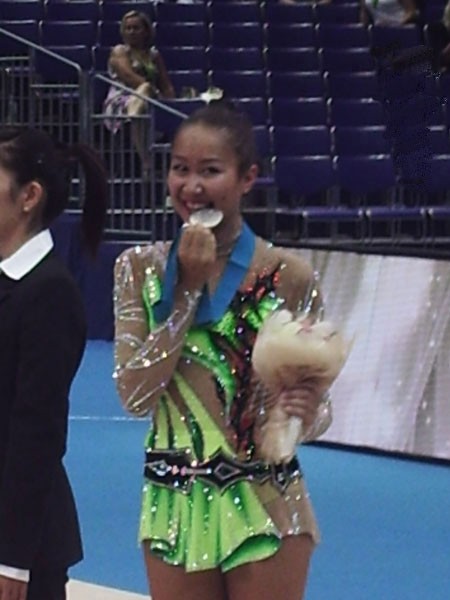 Aliya Garayeva has become silver medalist in the final with ball, and the team consisting of Aliya Garayeva, Anna Gurbanova, Zeynab Javadli and Samira Mustafayeva has won the bronze medal. So, our gymnasts surpass the result of the last world championships 2007 in Patras. Then we had only one medal – bronze in team competition.

- We are too glad that we could surpass the last result,- told Aliya Garayeva in the interview to Day.az. – We kept our positions in the team competition, and in addition we get one more medal in individual finals.

- Are you satisfied with your performance in the first four days of championships?

- Yes. Especially, today. I have done my best to to execute all the plans of my coaches. In the previous days I hav done some mistakes with rope and ribbon. But I have done better the final performance with ball and get the second place.

- Is the ball your favourite apparatus?

- I like it very much, but also with other apparatuses I try to do the best.

- In this championships there is no one equal to Yevgeniya Kanayeva who has already won everything possible. In the final with the ball you finished second to her. Can wa call you a mini-world champion, considering that Kanayeva is out of rivalry?

- How do you appreciate the performance of your team-mates, with whom you once again have entered into top three in team competition.

- They have great merit in our third place in the team competition. Both Anna, and Zeynab have done everything to get maximum higher place. You noticed that how stubborn struggle there was for the third place between us and Ukrainian team. One moment we were fourth, but finally we could get the bronze medal.

- At September, 11 you will compete in all-round finals. How do you evaluate your chances?

- We have already shown what Azerbaijan is capable to do. Let’s say that – we have already fulfilled the program at the minimum, but we are not going to stop at this. We will try to perform with dignity, and to make glad the audience, the judges and our coaches, and also ourselves enjoy of this.

I would like to congratulate with this success our country, all the sports fans, and my federation.