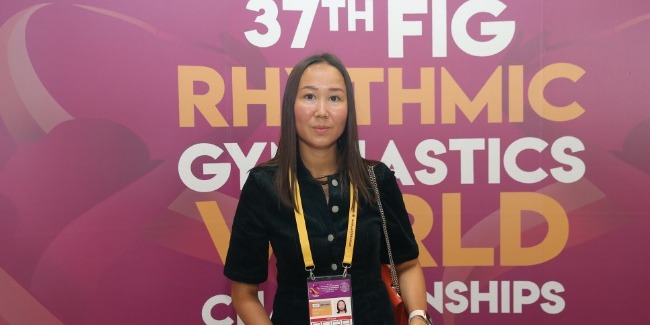 At the meeting with journalists at 13:30, Garayeva stated that the created conditions for gymnasts in Azerbaijan, can not be met in any other place of the world.

She also gave a wonderful assessment to the hall of Milli Gimnastika Arenasi (National Gymnastics Arena), adding that Baku has always been famous for very good organization of tournaments and trainings.

"I had a chance to work in Europe, and I would say that Azerbaijan has the best conditions", Garayeva emphasized.

Speaking about the performances of gymnasts from Azerbaijan, the former gymnast said that according to the scores from the judges, Zohra Aghamirova entered the top 24. Garayeva congratulated both Aghamirova and Azerbaijan Gymnastics Federation on this achievement.

"I continue to follow the Azerbaijani Gymnastics, the successes of girls are very interesting to me. Although I have two children now, here I have grandmothers who help me, and therefore I can afford myself to support our athletes from the stands," Garayeva said.

The former European champion advised gymnasts to enjoy the whole process, emphasizing that gymnastics is a sport for young people, and soon, unfortunately, everything goes away.

“You need to understand that this is not forever and you should enjoy gymnastics here and now, while there is an opportunity. The more you give now, the more you will receive later, especially, before preparing for the Olympic Games,” Garayeva concluded.