Aliya Yusupova: Mariana Vasileva knows how to eliminate their mistakes best of all 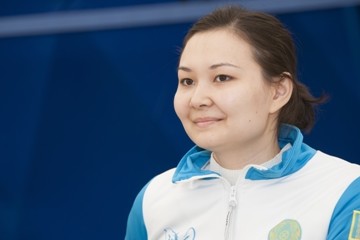 A well-known Kazakh gymnast Aliya Yusupova is in Baku for several days. She has come to the capital of Azerbaijan with her gymnasts. Aliya Yusupova talked about her career, her cooperation with the Azerbaijani national team's head coach, Mariana Vasileva, as well as recollected her previous visits to our city.

"I brought two of my gymnasts to Baku and we are already training in the hall of the national gymnastics federation for several days. Mariana Vasileva prepares for them a masterly program. I have been known her for a long time and I like her work."

"How do you like a new hall of the national federation?"

"It is my first time in this hall and I like being here very much. It is pleasant to see so many young gymnasts. I can judge the growth of Azerbaijan gymnastics by their trainings. There is development not only in infrastructure. The development of sportswomen is also obvious. Of course, the ways of gymnastics development in Kazakhstan differ from the ones in Azerbaijan, as we are in Asia and our gymnasts cannot participate in the European Championships. We meet with your gymnasts and coaches only during the Olympic Games and World Championships."

"You have probably seen a new gymnastics arena under construction next to this hall. There will be held the European Championships in 2014 and the 1st European Games-2015."

"If we are not mistaken, there is a sports school named after you in Kazakhstan?"

"Yes, you are right. It opened three years ago after I had finished my career. And, 150 children appeared there in a short period of time. But I came here with those gymnasts who had joined this school changing their previous ones. I am the head coach of the national team but I am working with children. There is a whole team of specialists coaching the national team. An international tournament for the prize of Aliya Yusupova is held in Shymkent every year. By the way, the girl from Azerbaijan have also successfully performed there this year. Unfortunately I don't remember her name."

"Yes. I agreed with Vasileva that she will bring the national team's gymnasts to our tournament next year. To be honest, it was interesting for me to watch their performances. It was particularly pleasant for me to see Azerbaijani gymnasts. I would like to make special mention of Lala Yusifova who reached the final of the World Championships. It is a great result for a national staff. But she needs to train a lot. I will also note Marina Durunda who is a very promising gymnast."

"As an experienced gymnast, could you please suggest their weak points?"

"Everybody has his own advantages and disadvantages. I think Mariana Vasileva is a very strong coach and knows what these gymnasts need best of all, and, believe me she knows how to eliminate their mistakes."

"You are one of the famous gymnasts of the last decade, you twice performed at the Olympic Games, you met with leaders of the Azerbaijani national team several times."

"I ranked the fourth in Athens having lost to Alina Kabayeva, Irina Chashina and Anna Bessonova. And, I was left behind by Yevgeniya Kanayeva, Inna Zhukova, again by Bessonova and Olga Kapranova in Beijing. By the way, I was followed by your Aliya Garayeva who took the sixth place in Beijing. I am on friendly terms with all the girls."

"We hope you had time to visit the city during the training days."

"Of course. I have been in Baku two times - at the World Cup, where I won a medal and at the World Championships. The city has changed. It became larger and more beautiful. I made a tour also of the city with my girls, it was interesting for them. They became close friends with your girls."

"In general, I am pleased to be in Baku. Every time, I am cordially welcomed. It reminds me of my home. There are some similarities between Azerbaijan and Kazakhstan."

"What do you think of the cooperation of two national teams?"

"It will be good to hold joint training camps. I will tell Vasileva about it.

"By the way, has your daughter began to go in for gymnastics?"

"Amina is three-year-old yet. I feel she has an inclination towards this sports discipline but I do not want to rush her. If she has a little interest running in her blood, she will be engaged in it."