Altay Hasanov: “Azerbaijani gymnasts have achieved the goal set at the European Championships in Vienna” 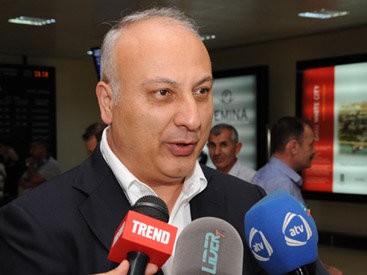 “Can we say that our expectations for the European Championships are justified?”

“We set out for Vienna with hope as we worked a lot to achieve the result. The girls worked hard, the coaches put their heart and soul into the exercises. Despite the fact that our junior team had performed at many prestigious competitions, where demonstrated quite successful performances and won medals, they participated in such an important tournament like the European Championships for the first time. And, now, we have the success that we expected. Second place is a great honor for us, it is important and we deserve it.”

“When we were preparing for this championship, we set ourselves certain goals and tasks. And, now, we can say that they are achieved. Our girls won the silver medals. There was a strong rivalry, it was hard but we became the second after the Russian team which is a very great success. The people who are familiar with rhythmic gymnastics understand well on what a high level we have risen. I would like to express my gratitude to our Embassy and the representative of SOCAR in Vienna, Gulmirza Javadov, as well as to the Cultural Center of Azerbaijan in Austria for their support. I congratulate all the employees of the Federation at the head of its President, Mrs Mehriban Aliyeva. Congratulations also to all the sports fans.”

“Do you think that the group team should have overcome a psychological factor at the European Championships, as, after all, they definitively obtain the international recognition by winning the event’s medals?”

“You are right. Especially, if to take into account that they were competing for the medals in a foreign country and not at home. They won the awards in the centre of Europe and mounted the podium with such recognized countries in gymnastics like Russia, Belarus. And that is worth a lot.”

“Does this mean that the process of generation rising is successful?”

“The place of previous generation of gymnasts has been taken by new sportswomen. And it is very important that they are local personnel and were able to win those high positions that we had before. And the result was practically achieved by domestic gymnasts.”

“And what can you more specifically say about the seniors?”

“Marina Durunda and Lala Yusifova certainly have a future. They performed among juniors not long ago and they joined the senior team competition at the continental championship for the first time today. Therefore, present results are also successful for them. Certainly, they could have performed better. But I think their victories are ahead of them and great future awaits the gymnasts. Upon completion of the Olympic Cycle a skilled gymnast Aliya Garayeva left big-time sports and these girls took her place. In spite of this fact, Azerbaijan retained the fourth position in Europe. So, we didn't lose our positions but even more strengthened them which was a great achievement.”

“We should not forget that they performed with the elite - those athletes who competed at the Olympiad. This is a great success for the last year's juniors – to reach the finals among such competitors and impose a contest on them. Marina and Lala have a year more to pull up while the rivals - to grow old (smiles).”

“At the closing ceremony, you were presented with the flag of the European Union of Gymnastics, and, now, everyone will wait for the continental championship-2014 in Baku…”

“You know that Baku has turned into one of the Europe’s sports centres for the last years. We have an experience in hosting large-scale events, and, if we speak about rhythmic gymnastics, it will be the fourth major tournament after the World Championships and two championships of the Old World. Therefore, the European Gymnastics Union’s authority is confident that the championship will be held in Azerbaijan at high level and we can achieve it. The organizing committee has been established already and held its first meeting. We're getting ready to host an event at high level. We hope we will succeed in Baku next year as well. And I hope we will organize it in a proper manner and all - both guests and fans - will be content.”