ALTAY HASANOV: “THE EUROPEAN UNION OF GYMNASTICS WILL JUST BE PLEASED IF THE CONTINENT’S NEXT CHAMPIONSHIP IS HELD IN AZERBAIJAN AGAIN” 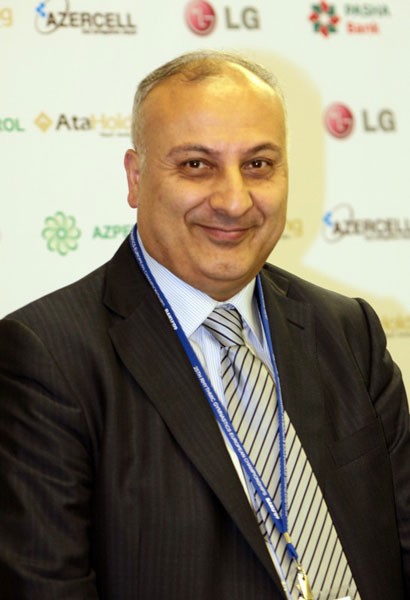 The vice-president of Azerbaijan Gymnastics Federation, in his interview to Day.Az, reviews the results of the European Championships held in Baku, where the country’s sportswomen achieved the best results in the history of domestic gymnastics.

“Dear Mr. Hasanov, we congratulate you on successful completion of another large-scale event in rhythmic gymnastics in Baku – the European Championships. How do you estimate the performances of Azerbaijani gymnasts?”

“Thank you for your congratulations. I am certainly contented with the results achieved. Some concern for our gymnasts’ results came partly into view in my interview given on the threshold of the championship. It was not pessimism; it was just a real value of state of affairs.”

“Fortunately, our concerns have not been justified. On the contrary, our gymnasts surpassed themselves. So, of course, I am contented with the result. We have won two silver medals which will go down in history of Azerbaijan rhythmic gymnastics forever. We have never succeeded in achieving such a high result in a team competition and in a tournament of group teams before. Do not also forget Anna Gurbanova’s bronze medal in exercise with a ball…”

“This “bronze” was won in a tense contest, in a rivalry with the stars of the world gymnastics…”

“You are quite right. Before the championship’s start, the coaches had fairly decided that Zeynab Javadli was not ready for the championship, and only exercise, which she would have to perform, was entrusted to Anna Gurbanova. As a team fighter, Anna performed splendidly. I could say she did the impossible.”

“Aliya Garayeva is regarded as our team’s number one gymnast but she had certain problems after the Olympiad. And, Anna, at the least, is highly competitive with Aliya today. Gurbanova’s bronze medal won in such a severe rivalry is an index to her professional growth. It was also noted by the president of our Federation, Mrs Mehriban Aliyeva during her meeting with the gymnasts.”

“Returning to the results in a team competition, I would like to say that Anna and Aliya managed to raise their points to the highest degree. The higher point was received only by Russia, and it is very difficult to compete with Russian gymnasts as equals.”

“As to the junior group team, they made a revolution in Azerbaijani rhythmic gymnastics as well. Our young gymnasts managed properly to dispose themselves to the contest. We are very grateful to their head coach Mariana Vasileva who prepared the team for the European Championships so well.”

“In your opinion, did our rivals, especially, Ukraine which was moved to the third place in a team competition by our gymnasts, expect high results from Azerbaijani gymnasts?”

“It is very pleasant that our breakaway from the Ukrainian gymnasts in a team competition was more than 3 points. Taking into account that the very slightest difference in points often decides the medals’ fate in gymnastics, we can say that the advantage of the Azerbaijani national team over the Ukrainian was incontestable.”

“Ukrainians were depressed and surprised. Although, there was nothing to be surprised: there was Anna Bessonova in the Ukrainian national team but there were also young gymnasts who considerably yield to their leader for the time being. And in our team – two stable gymnasts well-known in the gymnastics circles. They successfully performed and fairly received high points and took the 2nd place as a result. The girls managed to brace themselves. Probably, home walls also helped them. Possibly, success was on our side. Although, as a famous coach Irina Aleksandrovna Viner says there is nothing accidental in sport. Everything depends on how hard you work. In her opinion, we de