ANNA BESSONOVA: DURUNDA AND YUSIFOVA ARE YOUNG AND THIS IS THEIR ADVANTAGE 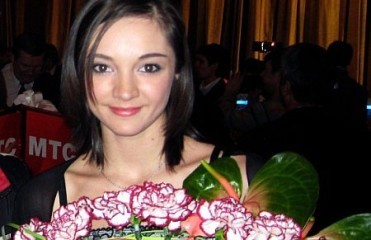 The Ukrainian gymnast repeatedly won the World and European Championships and became the prize-winner of the Olympic Games, and, those who had seen her expressional and emotional compositions could not remain indifferent to this great athlete any more. At the World Championships in Kiev, she is commenting the performances of participants, and, despite a very busy schedule, she has willingly agreed to answer our questions.

“Anna, what do you think of the current situation in rhythmic gymnastics when there is a number of promising gymnasts but no strongly pronounced leader?”

“I also caught myself at this thought. But the reason is that the present athletes are still very young. Actually, they are just gaining experience, while the gymnasts of my generation were twenty five-year-old when our career was in full bloom. So, if to look at the present girls in four or five years, there will probably be the same picture, like we had before. May God grant them health and patience which the previous generation had. During this period, the coaches will teach them the skills thoroughly and the athletes themselves will become more mature. Actually, the girls are all the Championships’ discovery. They are just revealing their skills to the public at large and they are just asserting themselves. And, I hope gymnastics will come back to the contest and the state which was during my generation's performance.”

“And what impressions have been formed from the performances of Azerbaijani gymnasts in Kiev?”

“The very positive ones. For example, Marina Durunda and Lala Yusifova have all prerequisites to become world-class gymnasts. The girls already reach the finals, they are included into the strongest groups and this fact shows a lot. In addition, they are young and this is a great advantage for them because they have a huge potential and time for further professional growth. And, I think they have a great future, even though they have just past junior age. I wish them further successes.”

“And, what can you say about the course of events at the World Championships? Are there any surprises or the current results are naturally consistent?”

“For me personally, it was a big surprise that we had managed to start the World Championships in general. There were some unfinished work and problems but everything was well solved in the end. I think these are the most difficult World Championships in the light of all the developments with the Technical Committee of the International Gymnastics Federation. Believe me it is not so easy to host the World Championships. As to the results, I have almost guessed right the quantity of medals won by Ukraine (Smiles). We certainly wished more but everybody competes here.”

“What do you do following the completion of your sports career?”

“I work as a coach together with my mother. I coach little children and those who are elder. I just wonder whether I can take a little gymnast and lead her to high level. If I succeed, I will be able to fulfill myself as a coach in full. It takes a lot of time and patience and I am actually a patient person.”

“And when can we approximately expect a new Anna Bessonova’s birth?”

“(She is laughing) I have no idea. We will see how God grants.”