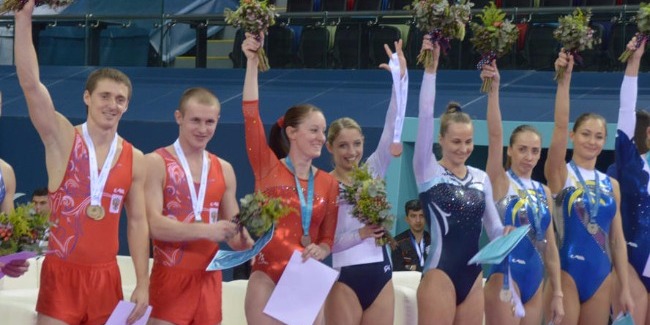 The athletes arrived in Baku to participate at the FIG World Cup in Trampoline Gymnastics, expressed their content with the high-level organization of competitions.

They highly valued the conditions created for the participants during the events.

Belarusian gymnast Hanna Harchonak said it was a great present for her to win a gold medal at the World Cup in Baku.

“It was a little bit difficult. First, the finals were held in the morning, which is something new for us. It is easier to jump in the evening. The program was complicated and each rival was stronger than another one. I made much effort to perform with dignity. First of all, it is the victory over myself, as the program was new. To be honest, I did not expect to win the gold medal, though I was the first at the Qualifications. All the girls were strong and I knew that it would be difficult. I thought that I would be in the top three at my best. So, it was a great present for me,” the gymnast said.

She further noted that Azerbaijan showed the wonderful organizational ability once again.

“I was here during the First European Games and I would like to emphasize again the excellent organization as well as the audience’s interaction. Very few fans come to the competitions in Belarus and they are very quiet, but, here, the fans cheer their gymnasts so loudly and it is wonderful,” Harchonak said.

Russian gymnast Dmitry Ushakov, who won the “gold” both in individual and synchronized exercises, noted that he would return to Milli Gimnastika Arenasi (National Gymnastics Arena) in Baku with great pleasure in 2018 to participate in the European Championships.

He noted that he was very happy to win the gold medal and was very content with his performance.

“Despite the slight mistakes, I succeeded to gain a victory. I had a very good mood during the entire competitions, based on my pleasant memories about Baku and the first European Games, it really helped. The organization of the competitions is excellent, everything went on precisely according the schedule. This is great. Milli Gimnastika Arenasi in Baku has turned out to be a lucky place for me. I will return to National Gymnastics Arena in Baku with great pleasure in 2018 to participate in the European Championships,” the gymnast said.

Polish gymnast Artur Zakrzewski, who was awarded with AGF Trophy for the highest execution score in the competitions among men, for his part, said the FIG World Cup in Trampoline Gymnastics in Baku was one of the best competitions that he participated in.

“The tournament has been organized at the highest level and everything is simply wonderful. It is one of the best organized events, in which I have participated. As for my award, I would like to say that half a year ago, I had the worst result in Poland, but, today, I am among the best athletes. This is my first final and I am very glad. Moreover, it is the first final in individual events for Poland since 1980. Therefore, I am proud of myself,” Zakrzewski said.

“I have already been to Baku at the First European Games and that the organization is fantastic again. Not all the arenas in the world can boast of such conditions. I would also like to mention a very friendly people, the fans - they are wonderful,” Driscoll said.