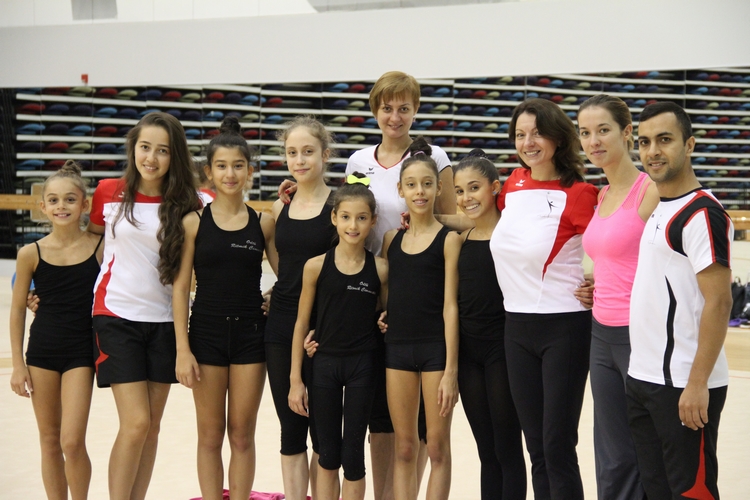 Gymnasts representing the Turkish METU (Middle East Technical University) club and the national team arrived at the camp in the capital of our country in the last days of summer. Ayshin Ozturk, club’s head coach told us about the purpose of the visit, on the upcoming World Cup, which will be held in Izmir at the end of September this year, as well as on many other things from the gymnastics world.

As far as we know, this is not your first visit to the capital of our country. Why did you come back?
We came to Baku to prepare for the upcoming Federation Cup [Turkey] and Turkish Championships. We could prepare at home, but still decided to come here, because you have simply awesome conditions for this.

What are your impressions of the Arena?
To this day, I have not seen such a thing, and I think the whole world too. We have been coming to the European Championships and being directly involved in this competition, we first saw the Arena. Naturally, it has amazed us and therefore we decided to hold our training camp here.

Do you have time to walk around the city? What did you particularly like or remember? Did the city has changed much after your last visit?
This is my sixth visit to Baku, so I managed to walk around the city several times. This time we walked through the Old Town, the Seaside Park and even saw Baku bird's-eye view - I saw city’s unknown side. We noticed the reconstructed buildings - each time the landscape becomes more harmonious and whole.

As we know, you are a former student of Mariana Vasileva. How would you rate her approach to work as a coach?
When I was an athlete, of course, I looked at her with different eyes. We perceived her as a coach and even more so as a mom. Now when I am also a coach, I see her as a colleague. Here in Baku Mariana created such a policy that simultaneously maintains friendly relations with all employees. At the same time, if she says any kind of something nobody even thinks to go against her words – everyone subordinates and students do what she says. There is a complete understanding and this is very important. Mariana never detracts the abilities of her coaches, their work is always in sight - we see it, the world sees it.

You are champion of Turkey in the past; how much gymnastics has changed since when you have directly participated in the competitions?
I think that I cannot make such a big comparison, but when I was a gymnast, we did not have such opportunities to participate in international tournaments and competitions. Now, coaches accompany athletes at on-site competitions, and this is very important for the Turkish rhythmic gymnastics. Of course, today, this sport is developed to a very high level in the world. Visual representation - what athletes can show on the carpet, and the way the audience meet performances made rhythmic gymnastics one of the most important sports in the world.

On September 22-28, Izmir will host the World Championships in Rhythmic Gymnastics - the most important sporting event in the second half of the season. How do you prepare for this start?
Personally, I have a mission in this tournament, which will be the biggest sporting event held by Turkey and our federation. We are not very experienced in this matter and not have special features, yet we have created all necessary conditions for the Championships. The whole team are working over the organization of the Championships. Another room to be used as a training room for all who attend the championship are being created in addition to the hall for events. This room will be left for us as a gift after the completion of the Championships, and Izmir will become the center of rhythmic gymnastics.