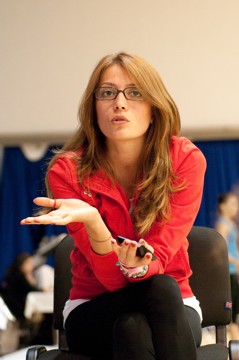 “How many members do you have within the delegation arrived in Baku?”

“We have 12 members within our delegation. Six of them are gymnasts, five coaches and me.”

“How many days will your training camp last?”

“The training camp will last 10 days. We have a good relationship with head coach of the Azerbaijani National team, Mariana Vasileva, who worked previously in Turkey. Her gymnasts performed for the Turkish National team. We wanted to come for training camp in Azerbaijan and the management of Azerbaijan Gymnastics Federation together with Vasileva were pleased to receive us.”

“What are the purposes of the training camp?”

“The rules in rhythmic gymnastics have changed. We held test trainings in Baku and found out our mistakes and defects. Mariana Vasileva took part in our training sessions as well. In addition, National Team`s choreographer worked with our gymnasts. Baku has an excellent center, where the country’s best gymnasts train. But in Turkey, gymnasts are training separately in cities. Two training sessions were held during a day. We improved choreography and flexibility, as well as level of handling with apparatus.”

“Which of Turkey`s leading gymnasts came to the training camp?”

“I can mention two gymnasts. They are Burchin Neziroglu from Izmir and Begum Guncher from Ankara. They had already participated in previous training camps in Azerbaijan, but they represented their own clubs at that time.”

“How often do you hold training camps with Azerbaijani gymnasts?”

“Our federations have established partner and brotherly relations a long time ago. We offered Azerbaijani gymnasts to come to a training camp in Turkey and invited them to "Rumi" tournament which will take place in April.”

“Are you contented with conditions of the training camp in Baku?”

“We liked it very much. The management of Azerbaijan Gymnastics Federation and your coaching staff did their best to hold the training camp at the highest level. Friendship between two countries also contributed to this. There was no problem. We are very glad to come to Azerbaijan for the training camp.”

“What are Turkish national team`s plans for this year?”

“Who would you like to note from Azerbaijani gymnasts?”

“You have many strong gymnasts. For the time being, I like Marina Durunda and Zhala Piriyeva very much. In general, Mariana Vasileva and her assistants are training hard with all gymnasts and I think that Azerbaijani athletes will achieve successes in forthcoming international competitions.”

In conclusion, we would like to mention that Berfin Serdil Sutchu was born in 1988 and she defended colors of the Turkish National team in different age categories from 2000 to 2008. She is the country’s six-time champion. Her coach was Maya Kondakova who is still working with the Turkish National team. Berfin is the winner of the international tournament held in Portimao, Portugal (neither before her nor after her nobody in Turkey achieved such a big success), participant of three World championships (2003, 2005, 2007) and two European championships (2004, 2006). She is the only Turkish gymnast participated in Italian Serie A Championships where she represented “Arbaseydon-Salerno” club. Today, she is the member of the Technical committee of the Turkish National Team.

Berfin graduated from the mathematics faculty in Manisa, and, in future, she wants to work in the field of sports biomechanics at the Sports Academy of Izmir. Besides her native language, she speaks easily Russian, English and Spanish languages.