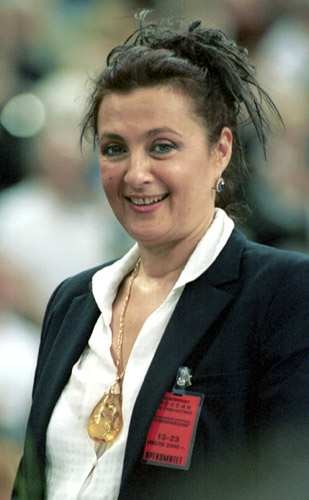 An interview conducted by Trend News Agency with Irina Viner, the president of Rhythmic Gymnastics Federation of Russia, head coach of the given country’s national team and adviser of the national team of Azerbaijan.

“First of all, allow us to congratulate you on your new state award – order “For services before the Motherland of the III degree” and the past international Women’s day, March 8.”

“Thank you very much. Russian president Dmitriy Medvedev awarded me at the Kremlin on the eve of the Women’s day. So, the holiday was in the very nick of time. There were so many congratulations, as well as from other federations. My Azerbaijani friends were among the first who offered their congratulations.”

“How do you estimate the readiness of the Azerbaijani rhythmic gymnastics national team for the forthcoming European Championships in Baku?”

“For the time being, I can’t say that the team is fully ready, though all the programs and music have already been defined, 70 percent of compositions has been made. The first performance took place at the Grand Prix in Moscow, but we saw some problems in the gymnasts’ program. Now, we are trying to eliminate them, and the girls will take part in different events – Grand Prix, World Cups, and prepare for the European Championships in Baku which is the main tournament, in particular, for the Azerbaijani team.”

“What is your estimation regarding the growth of a professionalism of Azerbaijani gymnasts and the team as a whole in a relatively short period? How have they succeeded in achieving such results?”

“It is better to refer to statistics, as statistics is a science showing the exact facts. Seven-eight years ago, Azerbaijan was represented in Europe only by Dinara Gimatova performing in a weaker group. She was alone. But the Azerbaijani team has risen to the strongest group since then, and performs with its full composition. Moreover, Azerbaijan took the third place at the European Championships and the World Championships in 2007. Aliya Garayeva won a gold medal in exercises with a rope. The girls also took part in the Olympic Games in Beijing and performed with dignity and confidence. And Azerbaijan also achieved very good results in group exercises which is a very complicated part of the program. And it is not only my opinion.”

“All these were achieved due to the fact that Azerbaijan Gymnastics Federation, and, personally, its president, Mrs Mehriban Aliyeva, created all favorable conditions for the training of a group team, as well as individual gymnasts. Professional coaches have managed to prepare girls who are training in the best conditions that can be imagined in rhythmic gymnastics.”

“What can you say about a Russian team? Is it ready for performances at the European Championships in Baku?”

“As to the Russian team, I can say the same. The country does its utmost for rhythmic gymnastics, as well as for other sports disciplines, to ensure that trainings are conducted in the best base, best conditions. We try not to skip any international events. And we have a great contingent consisting of gymnasts who seek to join the national team.”