Azerbaijani gymnast: I was anxious during competition, it badly affected my performance 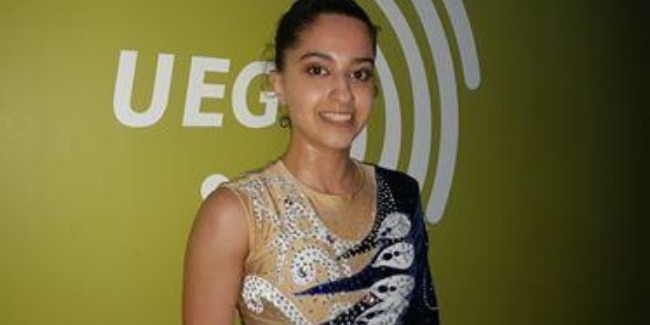 I did better during training sessions, compared to my performance at today's qualifications at the 11th European Aerobic Gymnastics Championships, Azerbaijani gymnast Khoshgadam Guliyeva told Trend.

"During the competition I was anxious and it badly affected the performance. Therefore, I could not perform as I wanted. Of course, the support of the fans helped me a lot to deal with my anxiety," the gymnast said.

Khoshgadam Guliyeva, who performed only in the individual program at the European Championships, noted that she began to practice aerobic gymnastics only a year ago.

The qualifications for senior gymnasts in the women's and men's individual program in trios, mixed pairs, groups and aerobic dance are taking place on the second day of the European Championships on May 25. The winners in the team competition among senior gymnasts will be determined on the same day.

The European Aerobic Gymnastics Championships is being held in Baku for the first time and will last till May 26.

According to the rules, a participant may compete in maximum three Aerobic categories. In the team competition, the winners will be determined for the five best performances.

The athletes from 22 countries are performing at the Championships.

On May 24, as part of the Championships, qualifying competitions among juniors were held. The junior team of Azerbaijan consisting of Aysel Aslanzade, Khadija Guliyeva, Lala Guliyeva, Fatima Gurbanova, Emiliya Makhmudova and Eleonora Yusifova reached the finals of the European Championships in the aerobic dance program.

Azerbaijan is represented by 17 gymnasts at the European Championships.