Azerbaijani gymnasts Aliya Garayeva and Anna Gurbanova: “During the forthcoming European Championships in Baku, our results, at the least, don’t have to be worse than in Euro 2007” 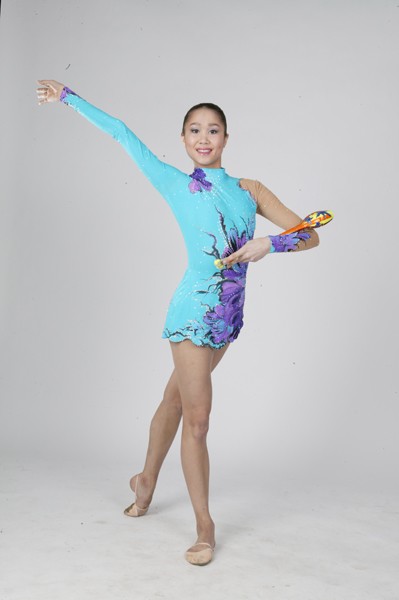 The audience, with surprise detected our strongest sportswomen, Aliya Garayeva and Anna Gurbanova, among people watching the events of Baku championship in rhythmic gymnastics, which came to the end on February 7. The gymnasts, who usually train in Novogorsk, situated near Moscow, at this time of the year, were very busy with giving autographs to young gymnasts and posed before the photographic cameras several times.

Aliya Garayeva: “We have come to take part in shooting of video-TV spot dedicated to the European Championships to be held in Baku on May 15-17 of the current year. It is a big responsibility for us, as we understand that it will be broadcasted on Azerbaijan television and become a main advertisement of the forthcoming event. It is very important for attracting of fans and all TV viewers.”

Anna Gurbanova: “Please do not ask us about the plot. We will not tell you. Let it to be kept in secret and be surprise for the gymnastics’ fans.”

“What performance should our fans expect of Azerbaijani national team during Euro-2009?”

A.Garayeva: “If we work hard at trainings, then the chances of good results will be high. The next Olympic cycle has come, everything starts from the beginning. A rivalry will be more serious than it was. I became a European champion in Baku in 2007. I will do my best in order to repeat that achievement.”

A.Gurbanova: “I am trying not to think about concrete places. My goal is to exploit all my potentialities to the maximum and not to make mistakes. We will perform at home and it makes us twice responsible. You cannot put your onlookers on the spot. It is a little bit more difficult for me to perform in front of my own audience than during other competitions. Nevertheless, I will try to demonstrate everything that I can.”

“From this year clubs have been replaced by a ball. How is work with this apparatus going?”

A.Garayeva: “It is all right. We are working, making an effort, trying to tame it. I think everything will be all right. Tournaments will start from the first days of March, where we will perfect the material mastered.”

”Have you renewed the program?”

“Yes. We have chosen the ballet “One thousand and one nights” by Fikrat Amirov for the performance with a rope. It is very interesting, I like this music. For other apparatus we have chosen “Sirtaki”, “Granada”, and “Scheherazade”. But there can be some changes in the program before the European Championships.”

A.Gurbanova: “I have a new program as well. National music for a ribbon, dynamic for a rope, the classical music in processing for a hoop, namely, the music by a well-known Hungarian violinist Edvin Marton, and tango for the exercises with a ball.”

“Before the European Championships, you will perform at many competitions, including Azerbaijan Championship to be held in April. Can it be considered as a dress rehearsal for you before the continent’s championships in Baku?”

“Every competition is as a dress rehearsal for me. I think there is no need to spare strength in any of them, it is necessary to do the best in all tournaments. Azerbaijan Championship – is a very important event, it gives a chance to show yours worth in front of your own fans. I plan to demonstrate all my skills there which I will have at that time.”

“The previous Olympic Cycle was very successful for Azerbaijani national team. What did you remembered best?”

A.Garayeva: “McDonald’s which was free of charge at the Olympiad in Beijing! (she is laughing). If to be serious, from the point of view of results, there were many remarkable events for the rhythmic gymnastics of Azerbaijan in th