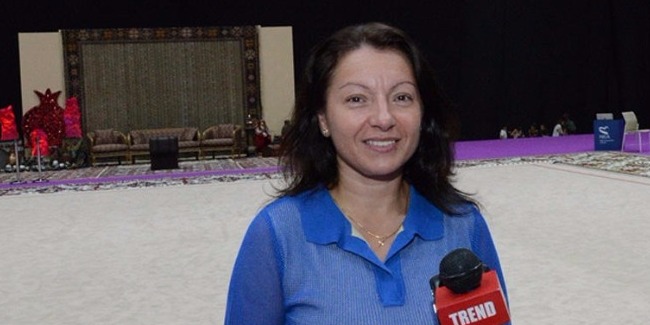 Mariana Vasileva, Head Coach of the Azerbaijani National Team, expects the country’s gymnasts to do their best at the upcoming FIG World Cup Final in Rhythmic Gymnastics in Baku.

“Azerbaijan will be represented by Marina Durunda and Zhala Piriyeva in the individual program of the event, as well as a group team, consisting of Siyana Vasileva, Alexandra Platonova, Diana Doman, Zeyneb Celep and Ayshan Bayramova," she told Trend.

“This is the most important event for a group team this year,” Vasileva added.

“I believe the Azerbaijani gymnasts will prove that they are strong despite everything. This is the main training for Durunda before the Olympic Games as she will perform in her native city, country, and this is a great responsibility,” said the coach, adding, meanwhile, Piriyeva must prove that she is a very strong and promising gymnast despite her young age.

Vasileva also noted that all programs of Azerbaijani gymnasts are interesting and complex.

“Durunda always performs well with a ribbon. Piriyeva will demonstrate very complicated exercises with a ball and clubs. We hope she will perform the exercises successfully," the coach said.

Vasileva added that the final stage of the event will be significant.

“Strong athletes in group and individual programs will take part in the final series of the event. Such World Champions as Yana Kudryavtseva, Margarita Mamun and Alexandra Soldatova, as well as strong teams from Russia, Italy, Bulgaria, Spain and Japan will arrive in Baku to take part in the competition,” Vasileva said.

“The strongest gymnasts will perform in Baku as this is the last competition before the Olympic Games in Rio de Janeiro," the coach added.