DMITRI POLIAROUSH: THE MAIN THING IN TRAMPOLINE IS EDUCATION AND TRAINING 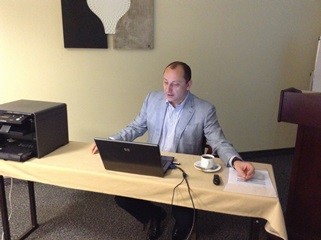 Early 2014 has been marked for Azerbaijan Gymnastics Federation by a visit of a member of the Trampoline Gymnastics Technical Committee of the International Federation Dmitri Poliaroush to Baku.

The Belarusian representative, living in American LaFayette town (it should not be confused with the famous Galleries Lafayette in Paris), which is not far from New Orleans, is the six-time World Champion, the seven-time winner of the European Championships and twenty-time holder of the World Cup.

Poliaroush led the International Judges' Courses in Baku, talked about main things in trampoline, was thrilled with the buildings' illumination and fortified himself with Azerbaijan cuisine.

"Dmitri, how have the courses gone off?"

"Everything has gone off perfectly well and in an organized way. These are already the third international courses in my career at the Technical Committee led by me independently including the intercontinental one. We also agreed to hold coaching courses in Baku in future. Your federation has a solid team, and, this is an essential condition for any successful undertaking."

"To what extent has a tendency of popularity of trampoline gymnastics changed lately?"

"You know, many countries have begun to cultivate trampoline. I speak about Iran, Colombia, Turkey and Azerbaijan. You know it is not such an expensive sports discipline as artistic gymnastics where different apparatus are necessary. In fact, you need only a trampoline and hall with a height of 8-10 meters."

"Probably, it is too early to talk about trampoline gymnastics development in Azerbaijan..."

"For the time being, yes. But you are already taking part in the World Cup series, your gymnast Ruslan Aghamirov performed at the World Championships in Sofia last year, and, now, you are holding judges courses. Nothing is achieved at once. The main thing in trampoline - is an education and training. It takes from eight to ten years to train a high-class athlete when the peak comes to at the age of 20-22."

"A new training hall for gymnastics disciplines located behind the National arena has all facilities available for sports skills' improvement."

"I have been there and I just do not know what to say. No, there are three words I can say - it is splendid! Believe me, believe the specialist who has been in many places, you cannot see such halls everywhere."

"This year, the USA hosts the World Championships in trampoline. But not in New York or Washington, where the concerts or other team competitions literally take place every day and famous Madison Square Garden is taken on lease for 150 thousand dollars per day. It is decided to hold the championship in Daytona Beach resort city. There is a vacation and suntan season in summer, and, everybody will gather to watch at flying gymnasts in November."

"Baku is also a resort city. Which places have you already visited?"

"I have been in many places. I was thrilled with the beauty of the old city, the buildings' illumination. I am glad to see that there are still kind and hospitable people somewhere at least, and, of course, I like your cuisine."

"The first European Games will take place in Baku in 2015. Will you take any part there as the FIG Technical Committee's member?""It is a duty of the Technical Committee of the European Union of Gymnastics to organize and hold the event in trampoline during these Games. In principle, the FIG has to control a course of competitions. And if there is a need for my presence and advice, I will be all for it."