DORA VASS: TRAININGS WITH THE AZERBAIJANI NATIONAL TEAM - IS AN INVALUABLE EXPERIENCE 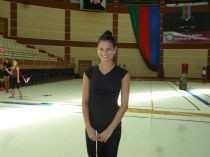 Now, all the efforts of the gymnasts are directed to the main start of the season - the World Championships to be held in August in Kiev. The Hungarian national team’s leader Dora Vass talked about her trainings in Baku, as well as her plans and friendship with our gymnasts in her interview.

“Dora, how are the trainings going?”

“Everything is just great, especially when you train in a company of athletes whom you know for a long time. In addition, the class of Azerbaijani rhythmic gymnastics school is known all over the world, so the preparation is very efficient here. And the capital of Azerbaijan is perfectly familiar to me as I performed here at the European Championships two times.”

“How popular is this sports discipline in Hungary?”

“I can't give you any definite answer. Despite the fact that I am the first number of the Hungarian national team, there is a quite steady interest in gymnastics but achieving successes in the international arena is extremely difficult. And, Azerbaijan, which has become one of the leading sports powers for a short period of time including rhythmic gymnastics, is a significant example.”

“Probably, in Baku, you lay the foundation for your performances at the World Championships in Kiev, don't you?”

“Absolutely. There is not too much time left till the event’s start and every training is important here. I am grateful to Mariana Vasileva, the head coach of the national team of Azerbaijan, who helps me very much. Actually, I consider her as one of the best tutors in the world today. Her remarks are very important to me and training camp in Baku will greatly help me to improve my preparation prior to the World Championships.”

“Have you become friend with someone from national team of Azerbaijan?”

“All the girls are great and we've known each other for several years. I have excellent relations with Marina Durunda, Lala Yusifova, Gulsum Shafizada, I'm also on very friendly terms with Siyana Vasileva. “

“You are aware that the Rhythmic Gymnastics European Championships will be held in Baku for the third time next year as well as Azerbaijan won the right to host the World Championships -2019. So, can we expect to see you frequently in our capital?”

“What do you think about the chances of the Azerbaijani national team at the World Championships in Kiev?”

“I think that Lala Yusifova and Marina Durunda will reach all the finals of individual exercises and try to compete for medals. As to the team in group exercises, I also see them on the top eight in the final.

“And what about you?”

“I think it will be great if I find myself within the best fourteen according the results of the championship. It is a minimum task.”