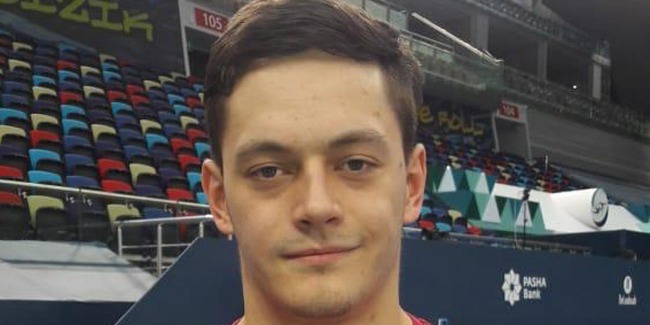 Croatian gymnast Tin Srbić expects to win gold at the FIG Artistic Gymnastics World Cup series to be held in Baku on March 14-17.

In an interview with Trend, Tin Srbić, who is the gold medalist of the 2017 Artistic Gymnastics World Championships, said that he will do everything possible to win.

"I am here [in Azerbaijan] for the second time. I like this hall [National Gymnastics Arena in Baku] very much,” he said.

Srbić also said that the arena “has everything that gymnasts need.”

“The National Gymnastics Arena in Baku is very big and a lot of people can come and watch. In Croatia we have very small halls,” he added.

Srbić said that after the championship in Baku, he will participate in competitions in Doha (Qatar), and then at the European Championships.

“I am world champion in high bar in 2017 and had a lot of World Cup finals. I train in Zagreb, the main city of Croatia. It is an old hall. It is hard to train all around, so I train only high bar,” he said.

Meanwhile, 121 male gymnasts and 49 female gymnasts will compete at the World Cup for obtaining a license for the Olympic Games. The athletes with the highest scores will also receive the traditional AGF Trophy Cup.