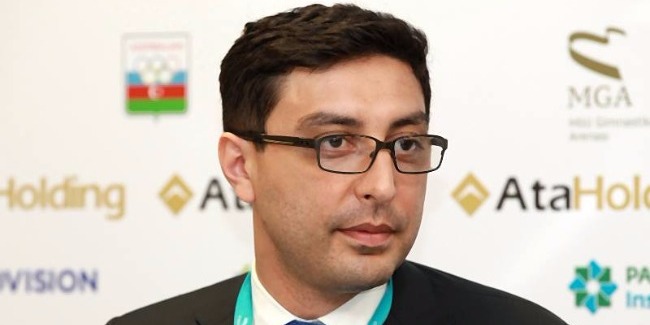 “Azerbaijan aspires to become a leader of the world gymnastics,” the Vice-President of the European Union of Gymnastics, Secretary General of Azerbaijan Gymnastics Federation, Farid Gayibov, said in his interview with a correspondent of “Vestnik Kavkaza” portal, commenting on preparations for the FIG World Cup final in Rhythmic Gymnastics to held in Baku on July 22-24.

First of all, he pointed out that Baku World Cup will be the final of nine  series held within the year. "Athletes’ four best results shown in the course of the year will determine the winners to be presented with the FIG (International Federation of Gymnastics) Cup in Baku. In addition, traditionally, athletes received the highest execution score will be awarded with AGF Trophy by the Organizers,” Gayibov said.

He stressed that there were no problems in organizational issues of the FIG World Cup in Rhythmic Gymnastics. "Our Organizing Committee carries out an intensive work, and we are ready for the competition. Gymnastics complex put into operation in 2014, made our organizational work much easier. The European Rhythmic Gymnastics Championships and gymnastics events of the First European Games took place there. Everything is underway according to our plans,’’ he noted.

AGF Secretary General mentioned unique conditions in Azerbaijan for the development of gymnastics. "Athletes in all six gymnastics disciplines can train in our gym complex. Existence of this gymnastics facility means that we have already become one of the gymnastics leaders. There are countries who have centuries old traditions in gymnastics, but we are on the way to establish our own school. New disciplines appeared in the last few years: Women's Artistic Gymnastics, Trampoline Gymnastics and Aerobic Gymnastics. By hosting international competitions we try to popularize these sport disciplines in our country,’’ Gayibov said.

"I would like to note that according to the FIG assessment system, Azerbaijan Gymnastics Federation is at the top five gymnastics federations in the world. The assessment system takes into account international competitions, judges’ and coaches’ courses organized by the FIG affiliated federations," the Secretary General noted.

He also added that AGF will start to prepare for the new season and the new Olympic cycle immediately after the Olympic Games in Rio. "We have plans to organize various international judges’ courses in the next cycle. As for such non-Olympic gymnastics disciplines as acrobatics, and newly introduced aerobic gymnastics, we need to achieve certain results in order to organize such events," Gaibov said.

"The FIG World Cup Final in Rhythmic Gymnastics will be the last major international competition in Baku this year. A number of local events, as well as, Azerbaijan Championship will take place till the end of the year. Neighboring countries usually join these national competitions. Moreover, there is a number of foreign countries, gymnasts of which constantly take part in the training camp here in Baku,’’ the Secretary General concluded.