GEORGES GUELZEC: “EURO-2014 TO BE A QUALIFICATION FOR THE EUROPEAN GAMES IN BAKU-2015” 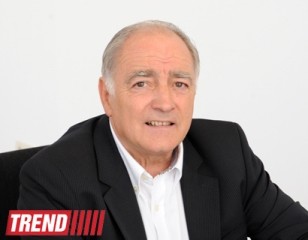 “Where have you been during your visit?”

“We have inspected the National Gymnastics Arena (NGA) which is under construction now and where the competitions to be held. And, you know, we are content with what we saw there. This is an excellent facility! During large-scale competitions, we usually take the halls on lease which are not specialized for gymnastics. But, here, everything is planned to be favorable for gymnasts. And the location of the Olympic Village is also very convenient as it is near the hall. By the way, I was surprised at speed and quality of works carried out. I have been in Baku at the European Championships in 2007 and 2009. They have been perfectly organized. But, I think, the competitions will go off even better in the new arena.”

“As to the European Games, we have met with the Minister of Youth and Sports, Azad Rahimov, the NOC’s Vice-President, Chingiz Huseynzada, and with other officials. We also visited the prospective Olympic Village. We saw high-level buildings there.”

“Observing joint work of Azerbaijan Gymnastics Federation and the Ministry of Youth and Sports, I simply do not understand how the level of the Euro Games can be low?! I think everything will be all right during the Euro Games! I do not like to forespeak but we will provide support in every possible way to hold gymnastics competitions at the very high level. And I wish the Azerbaijani representatives to win medals at the forthcoming events as your country is actively works in the direction of gymnastics development. But the only unpleasant thing is that it would be very difficult for the next country after Azerbaijan to meet the level set in Baku and they would have to try their best (is laughing).

“Is it already known which gymnastics disciplines to be presented at the Euro Games?”

“The participants will compete in artistic gymnastics (men and women), rhythmic gymnastics, as well as in trampoline. It is also possible that aerobics and acrobatic gymnastics to be included into the program. The last 2 disciplines are not Olympic sports but they are attractive as a show and can be interesting for the audience. We are interested in developing non-Olympic gymnastics disciplines.”

“442 sportsmen will be presented in gymnastics disciplines at the Euro Games in Baku in total. The competitions’ format is under discussions. But I think about 40 European countries will be represented in Baku.”

“Can we say that the next year’s European Championships would be a qualification for rhythmic gymnastics competitions at the Euro Games-2015?”

“The European Championships-2014 can have a qualification nature for the European Game. There are all the prerequisites for it.”

“What about other gymnastics disciplines?”

“With such a potential which Azerbaijan Gymnastics Federation has, your country is able to host events in any gymnastics disciplines, for example, in artistic gymnastics. Azerbaijan has organized only rhythmic gymnastics championships but your country can bid to hold the “artistic” Euro as well. There are all the conditions for it there. It only takes the Federation’s desire to do it.”

“Recently, there are rumors kept discussing that rhythmic gymnastics would be excluded from the Olympic program. What do you think of it?”

“To be honest I have not heard anything about it. Of course, no one could imagine that it would touch wrestling, but, I think that gymnastics as a most spectacular discipline would be in the list of the Olympic ones.”