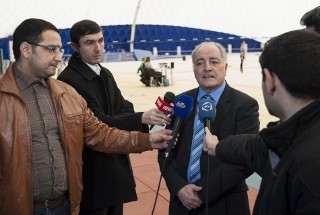 The head of the European Union of Gymnastics (UEG), Georges Guelzec, has paid a working visit to Baku. The schedule of the guest was quite saturated – he visited the National Gymnastics Arena, assessed the work progress directed on preparation for the Continent's Championship in Rhythmic Gymnastics-2014 and the European Games-2015.

"What can you say about your visit to Baku?"

"It is very efficient. It is not my first visit to Azerbaijan. I came here in 2007 and 2009. And I visited Baku about six months ago again as a part of a preparation process for the European Games. Within the framework of my next visit, we held talks with the representatives of BEGOC, the National Olympic Committee of the country, in addition, I would like to see how the construction of the Gymnastics Arena was going."

"What are your impressions, is everything going according to the schedule?"

"I have no doubts that the European Games in Baku will be held at the highest level. We can see that the construction of the Arena has entered into its crucial phase. We maintain constant contact with our colleagues from Azerbaijan, we discuss the details. So, everything is going according to the schedule, and, we all will witness an exemplary event in 2015."

"Baku will host the Rhythmic Gymnastics European Championships this year. What are your expectations from Azerbaijani gymnasts' performances?"

"First of all, I would like to mention successful performances of your gymnasts at the last year's major tournaments. At the European Championships-2013, your team had already proved itself and a junior team in group exercises won the "silver". But, I think the current season has all opportunities for the team to be even more successful. I suppose the team will perform even better within the native walls and will not confine itself with only award. Of course, I cannot look into the future but when you see the progress achieved by the Azerbaijani national team, you look into the future with optimism."

"On the other hand, it is clear that in comparison with the previous European Championships in Baku, the city has changed a lot, the infrastructure has been developed. In this sense, the forthcoming European Championships will be significant in many respects. In addition, the continental championship will be the preparation, and, at the same time, test event prior to the European Games, which is also very important."

"And what do you think of the development of gymnastics in Azerbaijan in whole?"

"As to rhythmic gymnastics, the development is obvious here and the results just prove it. I know that serious hopes are pinned on artistic gymnastics as well, I can see it. I think this wish will grow into good result at the European Games-2015."

"Have you already seen the logo of the European Championships?"

"Yes, I have seen it. This is an excellent choice. It perfectly combines both symbols of rhythmic gymnastics and the hosting city."