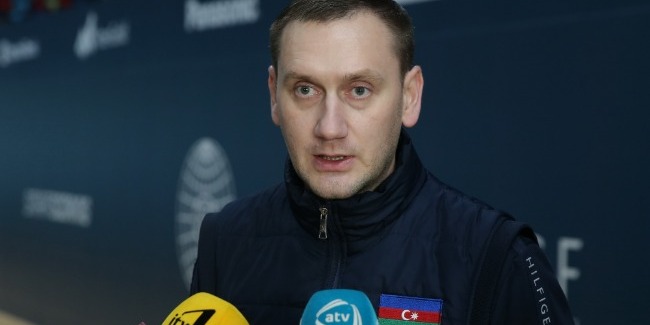 Preparation of Azerbaijani gymnasts for competing at the World Cup in Trampoline Gymnastics and Tumbling, to be held in Baku on February 15-16, is proceeding normally, Head coach of the Azerbaijani Trampoline Team Vladimir Shulikin said.

Shulikin also spoke about the goals and objectives of Azerbaijani athletes at the World Cup.

“Of course, I want them to get to the finals,” the Head coach said. “But I emphasize that our athletes must perform the program combinations well, show what we did during training, and then we will have chances.”

“The World, European and Olympic champions will come to Baku for the World Cup. Of course, it will be difficult for our athletes, but I reiterate that our task is to show our program and see our level among gymnasts performing in the category of seniors,” Shulikin said. “Our rivals are the world trampoline leaders, athletes from Belarus, Russia, Japan and China. It is important for Azerbaijani gymnasts to compare their performances, the complexity of the combinations and further develop."

“Magsudova will not compete for a license for the Olympic Games in Tokyo,” the head coach said.

"Unfortunately, Magsudova will be unable to compete for a license for the Olympic Games because qualification was launched last year and during this period she performed in the category of juniors,” the head coach said. “Two World Cups are left. One of them will be held in Baku while another in Italy. These competitions will be the last licensed ones. Seljan will not have the points for these competitions. I hope that in the next Olympic stage we will win a license for the Olympic Games in 2024 in Paris.”

Shulikin added that trampoline gymnastics and tumbling are actively developing in Azerbaijan.

The FIG World Cup in Trampoline and Tumbling will be held in Baku on February 15-16. This competition will qualify for the Tokyo 2020 Olympics. In accordance with the preliminary list of applications, 30 countries have already confirmed their participation in the competition. More than 150 gymnasts are expected to take part in the event.