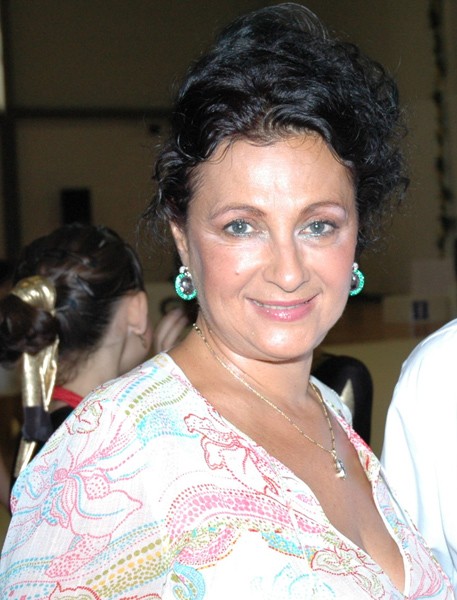 The national team of Russia in rhythmic gymnastics, both the group team and individual gymnasts, won with confidence at the Olympic Games in Beijing.

“How do you estimate the performance of Russia at the Olympiad?”

“It is difficult for me to speak about it, as I am the team’s coach. I know there had been some faults on the first day. But on the second day, after qualification and during the main events, gymnasts of the group team as well as individual gymnasts, especially an Olympic champion Evgeniya Kanayeva, did their best and fairly mounted the podium.”

“Did you expect that Kanayeva, who took the lead over other gymnasts with a big difference in points, would perform perfectly well?”

“It did not come as a surprise to me because Kanayeva performed without any visible faults and won at all the competitions held last year. And so she had become the Russian champion and took part in the Olympic Games as Russia’s number one gymnast.

She also had taken the first place in the European Championships held literally month and a half before the Olympic Games, but to say the truth the difference in points was less than at the Olympic Games.“

“As a consultant of the national team of Azerbaijan, we would like to know your opinion regarding Kanayeva’s prospects.”

“It will be very interesting for us to know your opinion regarding rhythmic gymnastics’ prospects in Azerbaijan.”

“I heartily supported the team of Azerbaijan, the team’s group exercises, as the girls from Azerbaijan took part in the Olympic Games for the first time. I can say they were fortunate enough and doing everything in their power performed quite well.

I can’t say that they fulfilled very complicated elements, I mean body elements but all they presented, they did without any mistake. Therefore, in my opinion, reaching the final, taking the seventh place among the world’s best eight gymnasts, best teams – is a great achievement.

In spite of the fact that they were taking part in the Olympic Games for the first time, competing with the strongest teams, at first, they had taken the lead over the team of Spain in the qualification, which was an Olympic champion not long ago. Then, taking the lead over the team from Ukraine they won the seventh place in the final. And this is a great victory.

And two individual gymnasts from Azerbaijan also were among the 12 strongest gymnasts at the Olympic Games. Two gymnasts are a maximum number. I think Azerbaijan had a third result on prize-winning places after Russia and Belarus, as, for example, according to the total sum the second gymnast of Ukraine, Godunko, did not take the lead over Garayeva. And the national team of Azerbaijan in group exercises took the lead over the team from Ukraine.

This success was achieved as a result of high emphasis placed on rhythmic gymnastics by the leadership of Azerbaijan Gymnastics Federation, by Mrs Mehriban Aliyeva, the president of the federation, as well as by the country’s leadership. It enabled the gymnasts to take part in the training camp, all the championships, World Cups, Grand Prix, i.e. they passed throu