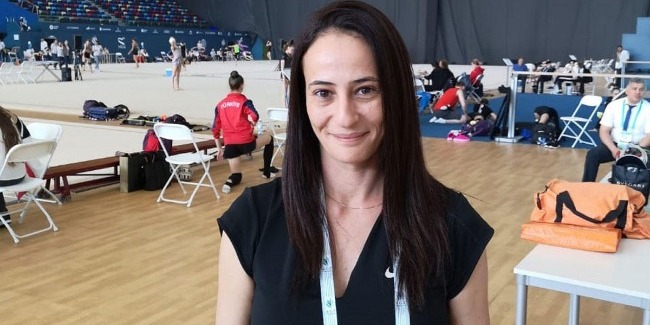 he National Gymnastics Arena in Baku is the best in the world, coach of the Israeli rhythmic gymnastics team Ayelet Zussman told Trend on the sidelines of the 35th European Rhythmic Gymnastics Championships in Baku.

"We are here in Baku in a very nice and big place," she said. "For me, it is the best in the world, because it is beautiful. There are so many carpets. Every time when we come to Baku we feel like we return home, because we spend here a lot of time. We came two months ago for training. Two weeks ago we were here for the World Cup. Nicol Zelikman performed very well."

"We really like Baku," she added. "We expect this competition will be the best. We have the junior team consisting of Nicol Zelikman, Linoy Ashram and Yuliana Telegina. Linoy was yesterday injured, so she will not compete. Yuliana Telegina will compete instead of her. I am sure that the girls will do their best. Of course, we are very happy that the World Championship will be in Baku, too. Think, we will visit Baku two or three more times this year."

The second day of the 35th European Rhythmic Gymnastics Championships is being held in the National Gymnastics Arena in Baku.

The qualifying competitions of senior female gymnasts in the individual program in exercises with a hoop and a ball are being held on the second day.