IT IS SO GREAT TO STAND ON THE PODIUM!.. 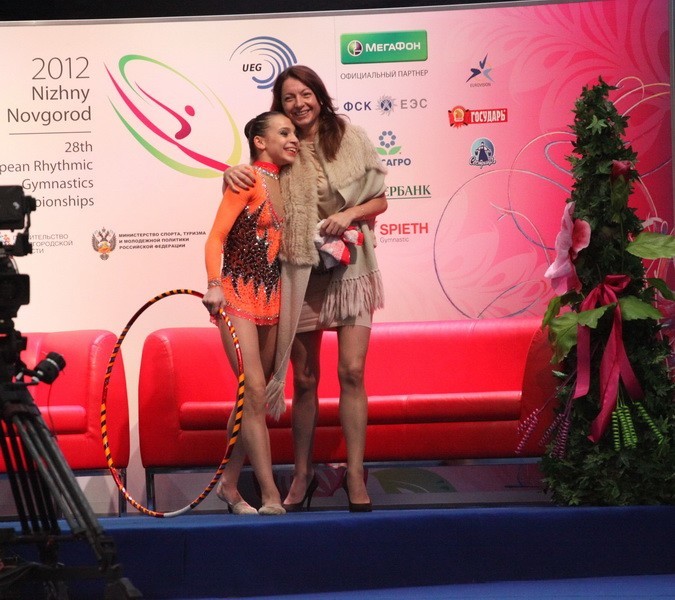 The Azerbaijani rhythmic gymnastics national team has quite successfully performed at the European Championships in Nizhny Novgorod having won three bronze medals. A special attention was focused on the team’s leader, Aliya Garayeva, who proved her high reputation once again. And this success was achieved in the most prestigious category as the bronze medal was won in the all-around.

“Congratulations, Aliya! This is just a splendid performance. However, not everybody has an opportunity to stand on the podium.”

“Of course, it is great! All of us, I and my coaches, including doctors and masseurs, worked and deservedly got this medal. I also congratulate my Federation. I think we deserve it!”

“It is more than deserved! You could see how the audience supported you!”

“It was very nice and it really helps very much. Thanks a lot to my fans. When I went into the hall I was asked: “Have you seen a group who came to support you?” I answered: “I know, I haven’t seen them yet but I can imagine.” They added: “They came with drums and hung flags all over the hall.” It was very pleasant!”

“You often go to various cities to take part in events. How have you remembered Nizhny Novgorod?”

“To be honest, I have seen here nothing but a hall and hotel. However, we went to amusement park and Luna Park two days running before the tournament. And I have to say there was as much drive as at the Championship!”

“Which apparatus was most difficult to perform with?”

“With a rope which we do not have in the current program (she is laughing)! To tell the truth, I executed all the exercises easily and with confidence. I just a little bit relaxed at the very end of my performance with clubs. Simply, it is necessary to perform well and do your job.”

“There is no much time left before the Olympic Games in London. In which mood will you fly to Great Britain?"

“Now, I feel myself more confident, and I think I can compete for medal. My result at Euro – is another evidence for it. I hope my result in London will not be worse. I want it very much and I will work hard on it.”

The national team’s immediate reserve has also won a reputation at Euro-2012 – successes achieved by Nilufar Niftaliyeva and Gulsum Shafizada indicate that the first team has an excellent replacement growing up. And it means that Nilufar and Gulsum will be able to make themselves known at the senior level in a couple of years, i.e. generational continuity to be observed.

A 14-year-old Baku sportswoman Nilufar Niftaliyeva expressed her gratitude to everybody who supported her during her final performances.

“In qualification, I made serious mistakes and I was very upset about that all day long. All our team, officials and even fans bore me up. And I inwardly said that nobody should be and would be upset tomorrow!”

“Thanks to all the people who supported us. We had the most active fans at this Championship. As I heard there were not only representatives of our diaspora from Nizhny Novgorod but there were even activists of the Azerbaijani Youth Organization of Russia who came from Moscow. At times, I had the impression that I was performing not at the European but at Azerbaijan Championship.”

“I would also like to share my joy with my coaches, my parents, team-mates and express my gratitude to my Federation without a contribution of which this success would not be possible!”

Another bronze medalist, also 14-year-old Baku sportswoman Gulsum Shafizada told about the feelings she had before the performance.

“According to the starting order, I appeared on the floor the seventh, and, to be honest my knees were trembling. But as the music’s first chords sounded, I even forgot that I was performing at the European Championships and even before the audience. Then I was told by my team-mates that I was performing in the way as if at the training in Baku. And when I saw joyful hugs of the head coach with the team’s doctor, I realized that the medal was in the pocket!”

“In future, I will try to raise my country’s banner higher than it was at this Championship. The plans are far-going, up to the next Olympic Games!”

“Aliya is a very strong and dedicated gymnast. She trained a lot, never missed the trainings and followed her coaches’ advices. It is very important. And here is the result! Today, Aliya has demonstrated some of her best exercises on the floor! She has a strong character and it helps her in the sport of highest achievements.”

“Aliya is very happy when her country’s banner rises at the events. And for our part we are delighted and proud of her successes as we provide her with advice.”

“I congratulate all of you, literally everybody who applied efforts in order to achieve this success! Separately, please, extend my congratulations to President of Azerbaijan Gymnastics Federation Mrs Mehriban Aliyeva who does everything for the development of gymnastics in Azerbaijan. It is so great when the Muslim country’s flag rises at such women’s sports discipline!”

The head coach of the Azerbaijani national team in rhythmic gymnastics, Mariana Vasileva, is also content with the results of the European Championships.

“In comparison with the last year’s European Championships, the achievements are self explanatory. If Azerbaijan won only one medal in Minsk last year, now, we have 3 awards in our medal box. The pace was set by the national team’s leader Aliya Garayeva who confirmed her high status once again. Her bronze in the Olympic kind of program – all-around final is worth a lot.”

“As to our junior gymnasts Nilufar Niftaliyeva and Gulsum Shafizada, I have no words to say. I just love them! The feelings which I have had with them today are incredible. Moreover, Azerbaijani team consisting of the same gymnasts, Nilufar and Gulsum, as well as Marina Durunda and a reserve gymnast Mansura Bagiyeva took the 5th place. And it is a great occasion and joy for us today!”

“I would like to congratulate all our fans, everybody who worried about us in Azerbaijan and also congratulate President of our Federation Mrs Mehriban Aliyeva on this success.”

Ahead, there are the Olympic Games in London, and, now, all the attention to be focused on the Games!”