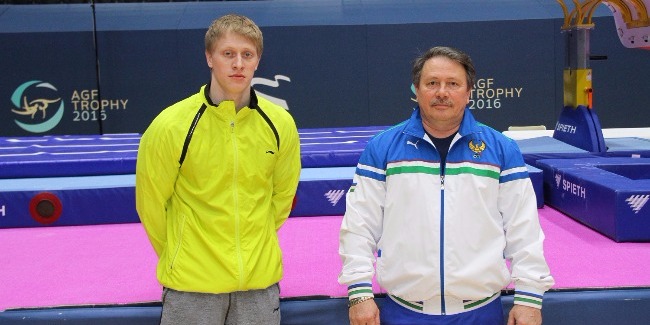 The press service of Azerbaijan Gymnastics Federation presents an interview with coach from Uzbekistan Konstantin Shaulov.

Konstantin, is it your first visit to Baku?

“I first visited Baku long ago; it was late 70s of the last century. At that time, the city was quite different. But, now, it looks like European city. Baku has changed a lot.”

How are your trainings going? Are you content with the conditions created at Milli Gimnastika Arenası (National Gymnastics Arena)?

“I visited many countries around the world. There is also a similar facility in Russia. However, here, in Baku, everything is done just splendidly. First, it is vast and there is a comfortable hotel inside. I will repeat that it is just splendid.”

"Our trainings are going quite well at this arena. We are at a preparation stage for Olympic disciplines, the main point of which is the pre-Olympic Test Event in Rio de Janeiro. We had a rest before the New Year, and, now, we were experiencing a recovery.”

How long have you been acting as a coach?

“I have been engaged in coaching activity since 1981. First, I had been a coach in Women's Artistic Gymnastics for nearly 16 years, and then proceeded to the men's team. But there was a time when I left gymnastics, however, I decided to come back after five years because of my youngest son. Currently, I came to take part in the World Cup in Baku with him.”

By the way, please tell us about your son Eduard Shaulov, about his achievements.

“Eduard turns 23 this year. My son is the Bronze medalist on Pommel Horse of the World Cup series in Portugal. He also took the third place on Floor exercises in the Asian Championship. He also performed at the World Championships along with Azerbaijani gymnasts Oleg Stepko and Petro Pakhnyuk.”

What results do you expect from this World Cup in Baku?

“Many famous gymnasts are coming to Baku for the event. It is enough, if I mention Japanese with the World Champions within the composition and Israeli gymnasts led by Alexander Shatilov. If we also add athletes from Brazil, Spain and Germany, the answer to your question is complete.”

What can you say about the current development of gymnastics in Uzbekistan?

“We have good and big halls for training. However, there is a lack of coaches. Those wishing to engage in gymnastics are more than enough, especially, at the initial pre-national team’s preparation stage.”

As we know, two athletes from Uzbekistan are qualified for the pre-Olympic Test Event in Rio …

“Yes, you are right. One of them is a representative of Men’s Artistic Gymnastics while another one belongs to the Women's team. However, no matter, who is qualified for the Olympic Games, Uzbekistan Gymnastics Federation will decide who represents the country at Rio Olympic Games. For now, the federation has made a decision to send Anton Fokin to take part in the Test Event.”