Mariana Vasileva: Any gymnast can become the national team’s leader 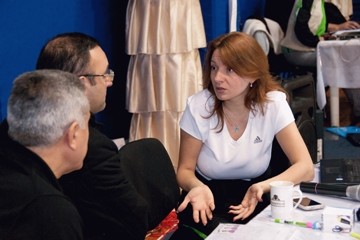 The Azerbaijani Rhythmic Gymnastics National Team is completing its preparation for the European Championships which starts on May 31 in Vienna. Less than a week prior to the beginning of the continental championship, the head coach of our team Mariana Vasileva shared her expectations from the event, talked about a minimum-goal as well as described characteristic features of the current composition in her interview to azerisport.com.

“The international calendar before the European Championships-2013 traditionally turned out to be quite saturated. There was a great number of competitions where gymnasts gave a run to their exercises. Therefore, first of all, my question is that in which form they are drawing near to the event in Vienna?”

“This year, we have not taken part only in one tournament in France and that was due to gymnasts’ tiredness. It was necessary to work a little bit at home. However, we participated almost in all World Cup and Grand Prix’s series, settled down on high places in the world rating. So, in whole, I am content with the performance of athletes at these tournaments, especially, if to take into account that the whole team is quite young. For example, in individual competition, being younger than many of their rivals does not prevent Marina Durunda and Lala Yusifova from sustaining a high level and making us happy with their results. The junior group team consisting of Nilufar Niftaliyeva, Gulsum Shafizada, Sabina Hummatova, Aliaksandra Platonova, Emilya Bagiyeva and a reserve gymnast Aynur Mustafayeva, who practically came back with the medals from all the competitions, also makes us glad.”

“Usually, after the Olympic Games, the first large-scale competitions are considered to be testing where the coaching staff focuses not only on results but also on inspection of perspective gymnasts with a sight on future. Based on this, what goals have been set for the tournament in Vienna?”

“Certainly, there is always a wish to sustain the high level and I constantly set such goals for my gymnasts. However, there is a human factor in such disciplines where a great deal is determined by the judges’ scores. Sometimes, you make a mistake in an exercise but you take a prize-winning place, or, vice versa, you act without any mistakes but something is lacking to win an award. So, the result is important, but, at the same time, it is necessary to present yourself with dignity. For example, despite the age, Durunda and Yusifova do not yield to more skilled competitors. When you are young you certainly have advantages as you have more time to improve yourself. Then, stable results will follow.”

“Aliya Garayeva was the national team’s leader for the last years. But there is no pronounced leader in the team now. In your opinion, is it a negative or positive fact? In the current situation, is the team supposed to enlist its efforts to achieve a desired result?”

“Aliya developed as the national team’s leader in 2007 while her other teammates had a supporting role. There were some advantages as Garayeva was one of the leading gymnasts of the world. To be honest I had thought that Aliya would stay for one more year in order to make it easier for her younger athletes. But we treat her decision with respect. On the other hand, there are also positive moments in this situation. Unless the team has a pronounced leader, any gymnast can take this place. All depends on how they present themselves on the international arena and how stable they are. There is a lot of work to do and the leader will be the one whose nerve would not fail her. It is also good when you have equal gymnasts in the team from the point of view of rivalry as well.”

“By the way, according to many experts, the junior group team's chances for the medals Euro-2013 are high...”

“Actually, both the team and the program impress them. Their positive reviews certainly make us glad, they give us energy for the further work. But we should not forget that the junior team’s gymnasts are still children, and, although, they are prepared, the question is how they would sustain psychologically as the European Championships - are a great responsibility. We had a test training recently and all the gymnasts approved themselves well. Such a competitive spirit of sportswomen made us very happy.”

“Taking into account that Baku will host the European Championships-2014 in the current Olympic cycle as well as the World Championships qualifying for the Olympic Games, is it possible to say that the team will focus precisely on domestic events?”

“This is what we tend to. Within this period of time, the girls will gain the necessary experience and will perform more relaxed. It will be possible to complicate the program to make it more interesting both to the audience and judges. Let's strive for good results …”

“And, perhaps, will get a new star of the world gymnastics and maybe a few…”

“I would rather prefer a few (smiles). I'm for the competitiveness. There is always a result when it exists.”