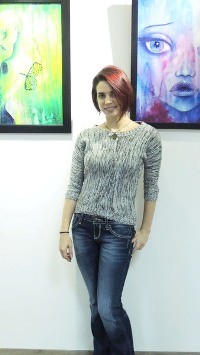 Young Azerbaijani artist Natavan Ibragimova, who lives in the U.S., has returned to Baku after 15 years away from her homeland to participate in the International Festival of the Biennale "Aluminium - Faces of Time".

She has been living in New York since 1997, and despite her age, is already quite popular there as a gymnast, artist and circus performer. The artist changed her name and now known as Nata Ibragimov.

The owner of such an extravagant name draws unusual pictures. Twenty of her works will decorate the walls and lobby of the National gymnastics arena which will host the European Championships in Rhythmic Gymnastics in 2014 in Baku.

Ibrahimova talked about her works, and a lot more in an interview.

Q. Nata, can you tell us more about the pictures that you are going to display in a complex of National gymnastics arena which will host the European Championships in Rhythmic Gymnastics in 2014 in Baku?

A. I've already started working on these paintings. Due to the fact that I am a gymnast myself, I am able to draw them with accuracy and I gladly agreed when I was invited to exhibit my works in the national gymnastics arena.

I plan to exhibit about 20 works. They will contain mostly gymnasts and in the style I see them. I can't say anything beforehand about the style of the work because they are not ready.

Q. Do you perform gymnastics now? Do you have any achievements in this regard?

A. I was involved in gymnastics since an early age when my parents were still living in Baku. I even won first place at the city tournament in rhythmic gymnastics, but then we left. However I continue doing gymnastics in America. I was not allowed to take part in international competitions due to the fact that I was not an American citizen. One should live in America at least five years to get citizenship. I was 15 years old when we got citizenship and this age is considered late. After that I became involved in painting and gave up gymnastics. At present I sometimes train someone, but am not involved in it seriously. I consider myself an artist.

Q. And what about your parents? Weren't they against your decision?

A. My parents work in medicine, and they really wanted me to follow in their footsteps and become a doctor. But I chose what I liked, and they agreed with my choice. I graduated from fashion school in New York, but I do not want to become a fashion designer, I like to draw more. My classes in gymnastics helped me a lot; I can draw girls in various forms. I do not have a particular style. They all are in one genre, honestly, I do not even know what to call this style.

Q. Is it the first time you have exhibited your work in your homeland?

A. Yes, just imagine. We have long wanted to visit Baku with my mother, but did not succeed. When I was invited to take part in the International Festival of the biennale "Aluminum - Face of Time", I gladly agreed. I was only able to exhibit 5 of my works, and now I want to "settle" them somewhere, because I can not take them back with me.

Q. Where do you get your inspiration?

A. My life inspires me. My life is very interesting. In addition, I was hired by the circus due to the fact that I'm a gymnast. I work for many New York circus companies. We travel around the world and perform at many events. It all inspires me to draw unusual pictures. I even sell some of my works. I have a small online store in America. My works are bought by people from all over the world. But I can't say that I earn much from it.

Q. Don't you want to organize some joint projects with Azerbaijani artists?

A. I would like to of course, but it all depends on the project because it is difficult for me to transport my pictures. I am communicating with many Azerbaijani artists through Facebook, but I know nobody personally. However, I would like to get to know them and see their works.

Q. Does your family follow any Azerbaijani traditions despite the fact that you have been living in America for so many years?

A. Yes, of course. There are a lot of Azerbaijanis in the part of New York where we live. There are also many Azerbaijani restaurants and products that are exported from here. In addition, we cook Azerbaijani dishes: kebab, for Novruz Bayram, as well as pakhlava, shekerbura and so on.

Q. What are your future plans?

A. I'm always busy. Presently, I am mainly working on pictures that are to be exhibited in the national gymnastics arena. And in general, we artists are looking for new galleries at all times, as most of us always have to be promoting ourselves. I also plan to release a new book that includes my works.

Q. And finally, I would like to know why you have changed your last name to Ibrahim?

A. The surnames of all family members in the States, regardless of gender, are the same. To avoid any issues and potential problems with documents, we have decided that it would be best to simply erase one letter.