NELLIE KIM: I STAND FOR GYMNASTICS INTRODUCTION INTO THE SCHOOL PROGRAM IN AZERBAIJAN 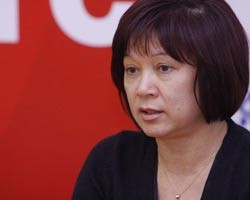 A five-time champion of two Olympic Games (Montreal and Moscow) Nellie Kim – is a living legend of the world artistic gymnastics. Five times, she became the first at the World Championships, and, twice at the European Championships, as well as she won a victory at other large-scale tournaments. She was the first of the world sportswomen who received the highest score of that time in gymnastics - 10 points, having executed a vault and floor with a use of new elements at the Olympic Games.

And, now, this cheerful person by nature, born in Tajikistan and performed for the USSR, and, living on the other side of the ocean - in the U.S., is the head of a serious organization called Women's Artistic Gymnastics Technical Committee of the International Federation.

Nellie Kim has recently visited Baku, and, of course, expressed her view on development of women's artistic gymnastics in Azerbaijan.

“What was the main reason of your visit to Baku?”

“I arrived on Azerbaijan Gymnastics Federation’s invitation. We have been working in close contact for the last years and I am aware of the projects and plans implemented for the purpose of developing of sports in your country. As the saying goes, a picture is worth a thousand words. And it was the time when I had to come here and to see everything with my own eyes. And, you know, I was amazed at what I saw. To say the truth I didn't expect such a scale. It's not just about gymnastics. Although a huge arena where athletes not only perform, but also train, arouses admiration. But I was also amazed at a scale, a pace of sports construction in general.”

“And, then, I did not recognize the city which had changed and revealed for me in a new way. Of course, I expected that I would see some changes since my last visit to Baku was 8 years ago, but, when I came, I was thrilled with the capital’s further transformation. I hope everything will continue to be built and developed with such a pace in future as well.”

“In general, when the state considers that sports and art should be at the highest level, it says a lot about the country. And, I think Azerbaijan – is one of the most progressive countries on the whole territory of the former Soviet Union. In addition, I see a great interest to sports here and it continues to grow. Moreover, the sport has a base here which enables to develop it in the country and to achieve high results on the international arena.”

“The successes of your team in rhythmic gymnastics speak for themselves. The team is within the world's elite and gymnasts sparkle on the international arena. As to artistic gymnastics, especially women's one, it is in its infancy. But the complex to be opened soon can significantly improve the situation in this matter, as there will be a wonderful gymnastics hall, where it is possible to prepare and perfect different elements. It is necessary to begin from grounds and holding of coaches’ and judges’ courses here can become a peculiar starting point. You know, artistic gymnastics – is a quite complicated discipline and you can lose points here even when you execute exercises in the wrong sequence. And, of course, the correct structures of compositions themselves are crucial.”

“And how a training of future athletes should begin?”

“I think gymnastics should be introduced in the school program, as it is a basis of all principles, foundation for future professional athletes. First of all, this is healthy life-style, awareness of their body structure. It will be great if there are gymnastics classes at schools, thus, enabling the coaches to select children into sections. This is exactly the way I started my way in sports. I just could not stand mathematics. When I was in my third year at school, I was selected by the coach for gymnastics classes: namely this incident had become the starting point of my entire life.”

“And how long it takes to train a gymnast?”

“I think it takes 6-7 years. It depends on age, abilities, basic training. And already 13-14-year old athletes can be delegated to the European Championships among juniors. But, there is certainly no single recipe of becoming promising athlete. There are a lot of factors affecting the final result.”

“When do you plan to hold coaches’ and judges’ courses in Baku?”

“I think it is necessary to hold it no later than January as the competitive season begins. There are a lot of tournaments, a calendar is quite saturated, besides, there are the European Games-2015 to be held in Baku, which are the reference point of preparation for the next few years.”

“By the way, what do you expect from the European Games?”

“First of all, holding of such an event in Baku is significant in many respects. You already have an experience of hosting the World and European Championships, and the European Games – are just competitions in a larger scale. By the way, I liked the location of the Olympic village very much – right on the opposite side of Gymnastics Arena. So, the gymnasts will save time which they have probably wasted on transport. In whole, scope of works for preparation for the European Games is startling and I am sure they will be held at the highest level.”

“Where are you leaving for from Baku?”

“I am leaving for Geneva. There will be held two-day symposium of the International Federation, the main subject of which is suggestions on a change of qualification system for the Olympic Games-2020.”