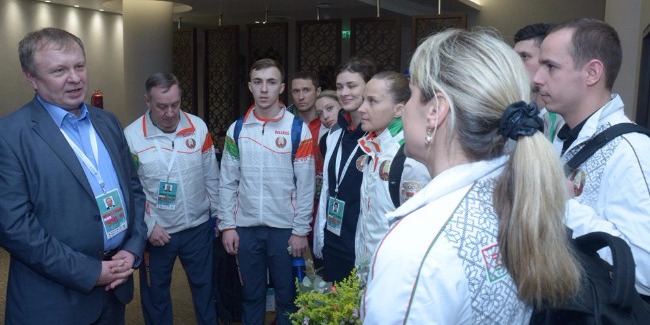 Official representatives of foreign countries in Azerbaijan taking part in the FIG World Cup in Trampoline Gymnastics in Baku are pleased with the high-level organization of the competitions.

“The atmosphere of the wonderful Baku city favoured the Belarusian athletes to achieve high results at the FIG World Cup in Trampoline Gymnastics,” Gennady Ahramovich, Belarusian extraordinary and plenipotentiary ambassador in Azerbaijan stated in his interview with Trend News Agency.

He noted that he has recently been appointed as Belarusian ambassador in Azerbaijan.

“I have been in Baku for half a year and I watch these competitions for the first time. I’d like to note a wonderful hall for holding high-level events, excellent organization of the events and excellent work of the staff of this facility,” he said.

Further, Ahramovich said the Belarusian team especially made him happy.

“The team won five medals, this worth a lot. Baku has always been friendly to Belarus in all respects and I think that the atmosphere of your wonderful city favoured our athletes to achieve high results,” he added.

Maria João Lopes Cardoso, chargé d’affairs of the Portuguese Embassy in Azerbaijan, noted that she had become a big gymnastics fan since she is in Baku.

The diplomat said she had already attended gymnastics competitions during the 2015 Baku First European Games.

“At that time I came to support our Portuguese gymnasts. Today, they perform here again. Namely, here in Baku, I has become a fan of this sports discipline and loved it,” Cardoso said.

She noted that competitions at the FIG World Cup in Trampoline Gymnastics had been organized at the highest level.

“The level of the competitions is as high as during the European Games. Everything is organized very well, high level of security is being felt,” Cardoso said.

First Secretary for Economic Affairs of the Embassy of Ukraine in Azerbaijan Vadim Sidyachenko said he was very impressed with the organization of the World Cup and the level of competition.

He met with the Ukrainian delegation arrived in Baku for the World Cup in Trampoline Gymnastics.

During the meeting, Consul talked with the athletes and coaches, congratulated them on winning of medals and wished good luck in future competitions.