Oleg STEPKO: Points received for parallel bars at Baku Championship turns out to be higher in comparison with the European Games 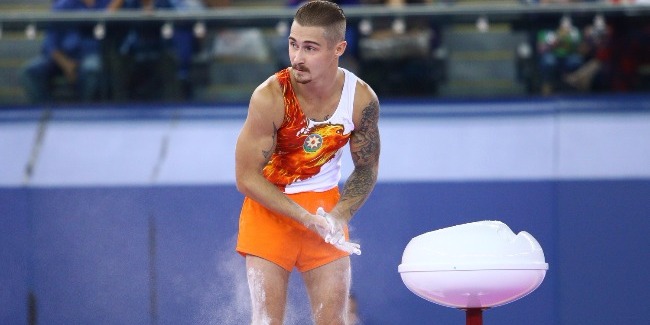 Oleg STEPKO:  Points received for parallel bars at Baku Championship turns out to be higher in comparison with the European Games

We have only twenty days before the start of the Artistic Gymnastics World Championships in Glasgow qualifying for the Olympic Games.  The Azerbaijani National Team members, including its leader - the European Games’ five-time medalist, Oleg Stepko, are preparing for the forthcoming event with all their might. Baku Championship has been one of the events for the athletes to test their program where Stepko won a victory. Afterwards, he shared his impressions on competition and expectations from the upcoming World Championships with azerisport.com Sport Agency.

How was a try-out in terms of readiness for Glasgow?

In principle, I have executed all the elements planned. But we still have time to work on different aspects of the preparation. I cannot say that my performance was weak at some apparatus and stronger on other. For example, I received seven points for parallel bars and it was higher than I had scored at the European Games. Of course, I wish to win the Worlds’ medal, but, first of all, it is important to qualify for the Olympic Games and to be included into the top eight. I am not going to predict anything about awards for now. First and foremost, it is necessary to find yourself in the list of twenty four best athletes according to the results of the all-around, and, afterwards, to compete for a place in the final eight. This is the aim for the World Championships.

In the course of Baku Championship, it seemed that you were not really content with a level of your performances on certain apparatus…

This is a normal working process. On the contrary, it is good that it happened now, at the control trial, when there is still time to make some corrections and improvements. I am relatively content with my performance, but there are still some points to pay attention and aim at further achievements.

You must have been especially motivated for the Worlds, as, at the last one, you performed with an injury and were not able to prove yourself in full.

In Nanning, I ranked thirty seventh, and, made useful conclusions for myself. And, as you can see, they were in my favor, the result made itself known. This is not only my achievement. This is the success of the National Team’s Head Coach, Pavlo Netreba, medical personnel, and, of course, the Azerbaijan Gymnastics Federation, which always helps and supports. We will always do our best and will further develop gymnastics.

Everybody has his own strategy to use at major events. Someone counts on one particular apparatus, the other one keeps in mind the all-around. What do you think of this?

I understood your point. For example, I am good at parallel bars, which I do with extra capacity. I can add difficulty to my performance when necessary. But, in our discipline, all-around is more valuable as its medal is more significant. You can perform on one apparatus your entire life, but, what if you did not succeed? You failed to distinguish yourself on your favorite apparatus at the World Championships. What will you do in this case? Will you sit and wait for another four years to qualify for the Olympics? But when your aim is the all-around, there is always a chance to try to qualify for the Games.

Which team tactics have you developed for the Worlds in terms of working on various apparatus?