OUR TASK IS TO SHOW THAT GYMNASTICS IS DEVELOPING IN AZERBAIJAN: HEAD COACH 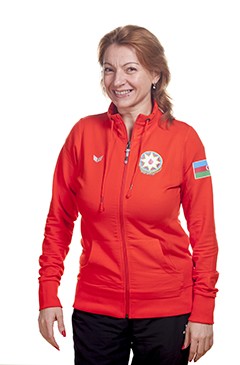 A grandiose event, the 30th European Championships in Rhythmic Gymnastics will be held in Baku on June 10-16. It is expected that the event will bring together athletes from over 30 countries. AzerNews has interviewed head coach of Azerbaijan's national team in rhythmic gymnastics Mariana Vasileva, who was glad to share her opinion, and to tell us about preparations for the upcoming event.

Last year, Azerbaijani gymnasts showed a successful performance as they won 85 medals in international tournaments. What do you forecast for the upcoming event this summer?

I do not have the habit to make predictions, because we are people - we propose God disposes. Our task is to prepare and show our athletes at the highest level, to show that gymnastics is developing in Azerbaijan, and that our school is able to compete with the most famous schools in the world.

Our gymnasts are working in full swing. I should say that we are ready for each start with great responsibility, because persons must take advantage of opportunities everywhere.

What about the composition of Azerbaijani national team?

The strongest 20 seniors, who were qualified at the European Championship in Vienna, last year, will participate in individual events. Fortunately, two gymnasts - Marina Durunda and Lala Yusifova - were qualified. Moreover, senior group teams will participate in the tournament, while juniors (aged between 13 and 15) will compete both in the group and individual events.

Have you prepared a new program for the audience?

We have developed a completely new program. I have changed absolutely all performances since last year. The first feedback I received from the experts after the first start in Estonia was positive - almost everyone liked them. I think the spice of the new program will be the performance of three balls and two ribbons to the music of Muslim Magomayev.

The 2009 was the beginning of my work with the national team of Azerbaijan, and I think we managed to do a lot of things during this time, and now interest in gymnastics is much more. In this period of time, 22 of our gymnasts became prize-winners of the European Championships. And after the 30th anniversary of the championship, I think that we will have an influx of volunteers who will go in for gymnastics.

Baku will host the first European Games in 2015. We already know that rhythmic gymnastics is included in the list of the Games. What will be the innovations of the Games?

We are pleased with the fact that not only rhythmic gymnastics, but also the rest five fields of gymnastics, including acrobatics - which is not an Olympic sport - have been included in this list. All the things are supervised by Azerbaijan's Gymnastics Federation. Olympic Games will be held in 2016. So, that is a good start before the Olympics.