Pavlo Netreba: Stepko and Paknyuk have chances to compete for the World Championships’ medals 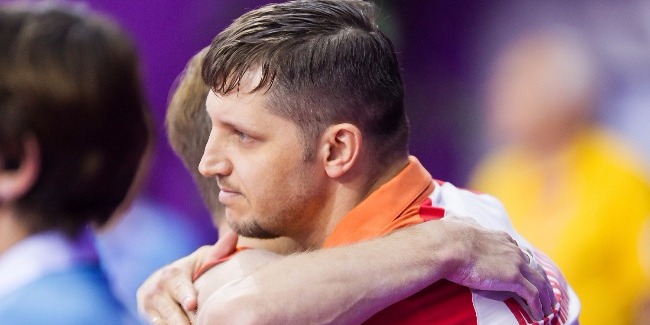 Pavlo Netreba: Stepko and Paknyuk have chances to compete for the World Championships’ medals

The Azerbaijani National Team in Men’s Artistic Gymnastics has proceeded to the final stage of preparation for the World Championships to commence in Glasgow on October 23 qualifying for the Olympic Games. Baku Championship, where Stepko won a victory, was one of the try-outs for the athletes to test their program before the season’s most major event. Pavlo Netreba, the National Team’s head coach, talked about the tournament, as well as the aims and goals for the Worlds in his interview with azerisport.com.

How important was a holding of Baku Championship before the World Championships in Glasgow?

So, it was the last control trial before setting out for the planet’s Championships, wasn’t it?

In fact, we planned everything in advance. Two weeks ago, we took part in the tournament in Israel. The following two weeks, we held ​​intensive trainings with a maximum load. After Baku Championship, we will do the same for the similar period of time, and, then, we will set out for Glasgow. We have quite experienced athletes and there was no need for them to have many control trials. The main thing is to carry out a considerable amount of work. In Baku, it is easier and more convenient to do everything that we need, as we have here at our disposal first-class hall, recovery remedies and medical staff. It is very compact and we really had good competitions. This year, the team competed in the European Games after which they were both physically and morally exhausted. As I said, the guys are experienced, so recent events were quite enough for us. Everything went according to the plan and we are heading to the World Championships in a good form.

In the course of Baku Championship, it seemed that Oleg Stepko was not so content with a level of his performances. Was it a normal working process?

During the trainings, Oleg had executed his routines with better quality, so he wanted to repeat it at the competitions. But, there was some uncomfortable point - a shortened warm-up, increased attention, not a usual lighting. Therefore, there were some inaccuracies. But, we have two weeks to work on them. I think you will agree that it would be much worse if Oleg was happy with his performances and became relaxed as a result. Now, we have things to work on, he realizes everything well himself. He also knows well enough with whom he will compete at the World Championships. In addition to the strongest gymnasts performed during the European Games, the representatives of Asia, America will take part at the Worlds. Geography in gymnastics is very spacious and Stepko knows with whom he will compete. Of course, we all wish his performances to be perfect. Unfortunately, it does not always work this way, but we will try our best.

Speaking about team members, will Oleg Stepko and Petro Pahnyuk compete at the World Championships?

Unfortunately, we will not be represented in a team competition, as we did not qualify according to the last year's World Championships’ results. Therefore, we will participate only in individual competitions. Initially, we supposed to perform with three gymnasts in Glasgow. But, Eldar Safarov was injured and was recovering after a shoulder injury. So, in this Worlds only Oleg Stepko and Petro Pakhnyuk will perform.

And what are the rules concerning qualification for the Olympic Games based on the results of the World Championships?

Medal, won on any apparatus or in the all-around, guarantees participation at the Olympics. Both Stepko and Pakhnyuk perform well on uneven bars and they received seven points for this apparatus at Baku Championship. This is one of the biggest difficulty bases. Maybe someone will receive 7.1 for this exercise. And their execution is also quite good. So, we will compete. Again, it is sport. We will try and see what happens in the end. Everyone wants to win the award but there are only three places on the podium. However, we have a chance. It is more pleasant to go to the competition when you know that there are good chances for you. And, if it does not work in Glasgow, there is an opportunity to qualify at the Test Event.