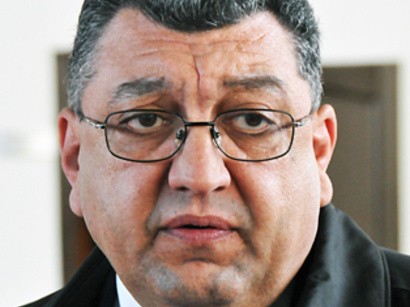 “Mr. Aliyev, new Olympic cycle has started. We would like to know your opinion regarding current sports state in whole and in gymnastics particularly in Azerbaijan.”

“Top-event is undoubtedly a decision made to hold the 1st European Games in Baku in 2015. I consider it as the great historical event. Entrusting of these Games namely to Azerbaijan, acknowledgement of victories of the National Olympic Committee headed by the country’s President Ilham Aliyev, is a high appreciation given by International and European Olympic movement to the work carried out in our country including the achievements in sports field. I am more than confident that these Games, the Organizing Committee of which is led by First Lady, Mrs Mehriban Aliyeva, will be successful both in sports and organizational aspects.”

“As to gymnastics, I have been at test training of the country’s national team recently. And do you know what I remembered? I remembered how we virtually had to start everything from point zero 10 years ago. At first, there was lack of elementary idea about holding and methodology of training camps, competitions. Azerbaijan was represented only by one (!) gymnast.”

“But, today, I saw the hall where was no room to move in the literal sense of the word. They began to select, discover gifted youth. Along with senior and junior sportswomen, the head coach Mariana Vasileva keeps an eye on 8-12-year-old gymnasts in the national team who work hard as well. The selection and preparation not only for this year’s competitions but next and following years’ events are in progress, i.e. well co-coordinated and collective work of all the coaches of the national team is apparent.”

“And I would not be surprised at all if bright stars improving their skills and gaining self-confidence day by day will flash in the sports sky soon. And talented Azerbaijani gymnasts will be well-known in the world gymnastics circles.”

“And National Gymnastics Arena will also favor it…”

“Yes, you are right. At present, up-to-date sports infrastructure has been created in Azerbaijan and corresponding processes are going on in this field. Construction of Gymnastics Palace is in progress with intensified speed, if one can put it that way, day and night. As the constructors assure, the complex will be ready by the end of next summer. And the European Rhythmic Gymnastics Championships-2014 will become its first large-scale test. Of course, we would like our spectator to see breathtaking competitions in rhythmic gymnastics, artistic gymnastics and trampoline on this arena at European Games-2015 as well.”

“And what do you expect from this year’s tournaments?”

“First of all, we expect successes and victories, as well as absence of any injuries. The competitive year will start with the World Cup in Estonia where our gymnasts traditionally perform with confidence. And, of course, the whole sports society of the country is expecting good news from the European Championships in Vienna in May and the World Championships in Kiev in August.”