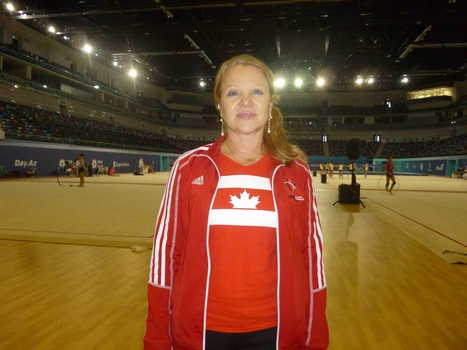 Perfect conditions of the National Gymnastics Arena attract not only teams of the Old World, but also teams from overseas. One of them is the Canadian team, whose leader, Patricia Bezzoubenko is preparing here for the World Championships to be held in Izmir. The coach of the Canadian team Svetlana Zhukova told azerisport.com about the productiveness of the trainings.

Perhaps, after a long flight you needed a couple of days for acclimatization.
Everything went more painlessly for us, as we arrived in Baku after trainings in Moscow on the eve of the Kazan World Cup. Well, after a performance in the capital of Tatarstan we immediately arrived in Azerbaijan. Another thing is that we had originally planned to arrive with the group team, but eventually came with the individual gymnast Patricia Bezzoubenko. I am very grateful to the head coach of Azerbaijan Mariana Vasileva who has created perfect conditions for us. We were given the carpet, so we can train even day and night and to watch strong athletes who are also prepare themselves according to plan.

In what conditions is Patricia Bezzoubenko now?
She had a hard summer in terms of the competitive schedule. Perhaps she is a little bit tired, but there are always some errors that must be corrected. I am glad that we can do this in Baku, in an environment that simply disposes to productive training: we can fix some elements, somewhere to learn from the Azerbaijani team’s gymnasts, to hear some comments from experts and coaches of other teams. That helps a lot.

What is the situation with the development of rhythmic gymnastics in Canada?
Athletes attend different clubs and there is no centralized trainings. Unfortunately, our sport has no significant financial support, so we develop as we can. Before Goodwill Games in Glasgow I managed to bring together three gymnasts, we had a two-week training camp and then showed a good result, winning gold in the team competition. However, in terms of development is not so simple, because the athletes go to school, live in different cities, and lack of specialized halls has its effect. Therefore, I am just happy that the Canadian Federation allocated fees for the trainings before the World Championships and we are in Baku. We hope that this will help us better to perform in Izmir.

What is the minimum objective for the World Championships?
We would like to be among the twenty-four of the strongest. At last year's World Championships Bezzoubenko was close to this result, becoming the 25th, so I want her to get better results. Let us see how it goes.

Probably, you have to prepare with the long-term view, because if Baku hosts European Games in 2015, Toronto will host Pan-American Games within the same period...
Certainly. Now, the Olympic Village is being built in Toronto, the arena is being prepared, but it will not be specialized for gymnastics. It will be used just for the competitions. However, being here in Baku, I feel all the seriousness of the preparation for the European Games. I am very glad that Azerbaijan has such a wonderful gymnastics center, which has all the conditions for trainings and achievement of superior results.