The acquaintance with the representatives of Azerbaijan at the World Championships: Zohra Aghamirova 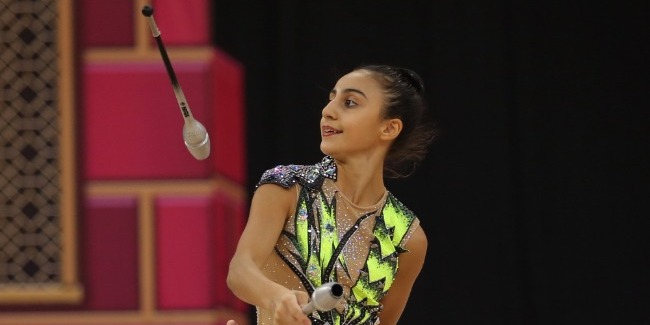 We would like to introduce the representatives of Azerbaijan to you prior to the 37th FIG Rhythmic Gymnastics World Championships.

On the eve of the World Cup, one of its participants, gymnast Zohra Aghamirova, who will represent our country in an individual performance program, spoke about preparation for the competitions and importance to represent the Azerbaijani National Team.

As many other athletes, Aghamirova came to the gymnastics classes with parents.

Aghamirova is a second-year student at the Azerbaijan State Academy of Physical Education and Sports. She loves to listen to music and sing during leisure time.

“In my leisure time I like to sing and listen to music. “However, rhythmic gymnastics is the most important thing for me. This is one of the most beautiful and feminine discipline of sports. Rhythmic gymnastics forms character, develops willpower,” she added.

The gymnast said she became worried at the competitions, but her teammates and the coach help to cope with it. Before the performance, she tries to concentrate and listen to the coach’s instructions. Certainly, the support of the audience gives her confidence while performing.

“It is easier to perform when you hear the audience’s support. Therefore, I invite everyone to the National Gymnastics Arena on September 16-22,” Aghamirova said.