The acquaintance with the representatives of Azerbaijan at the World Championships: Maryam Safarova 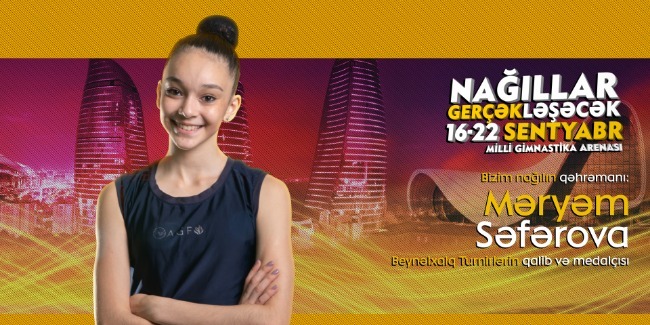 We would like to introduce the representatives of Azerbaijan to you prior to the 37th FIG Rhythmic Gymnastics World Championships.

Maryam Safarova is one of the participants in the upcoming competitions, who will represent Azerbaijan at the championships in an individual program. On the eve of the event, the athlete spoke how her love for rhythmic gymnastics began.

“I started getting interested in gymnastics after I watched a movie about this sport in my childhood. I liked it so much that I wanted to train myself. It just so happened that there was a gym next to our house, and seeing how girls went to train there every day made me want to do rhythmic gymnastics even more. I started training at the age of 6. As time went on it became clear that I was getting better at it and I began to engage in rhythmic gymnastics professionally. I like that in rhythmic gymnastics one can express their emotions and show artistry” the 16-year-old athlete said.

Participation in the 37th Rhythmic Gymnastics World Championships is a significant milestone in Maryam’s sports career.

“At the championships, I will perform in an individual program with one object - a rope. Before the competition I train a lot every day to show a good result. I realize the seriousness of the competition and I understand the responsibility we bear on our shoulders. I really want to perform well, without mistakes, so that my program is liked and remembered by the audience," she said.

She noted that he goal in sports is participation and victory in big tournaments and championships. “I wish to become a famous athlete," she said.

According to Maryam, support from the audience is of great importance to her during the competitions, so she invites rhythmic gymnastics fans to attend competitions and to support the Azerbaijani National Team.

“I get anxious before the competition, but the coach helps me to cope with it. She calms me down, helps me to focus and says the right words. The audience helps me a lot, their support inspires me and I perform better and with more confidence,” the athlete said.