UEG President: Success of gymnastics in Azerbaijan achieved thanks to policy of AGF President Mehriban Aliyeva 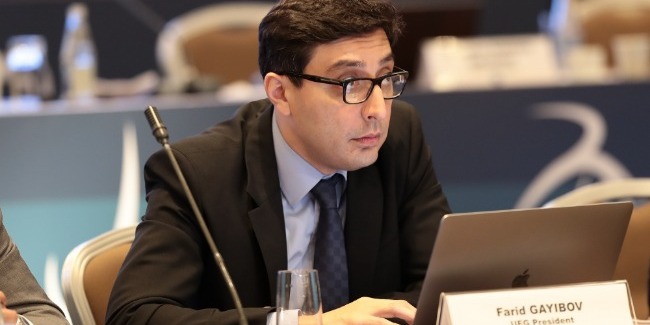 “The head determines how the Federation will work, defines its policy and what needs to be done,” Gayibov said. “Thank God the AGF has such a president, everyone dreams of such a leader. I know what AGF does for the development of gymnastics in Azerbaijan, and what kind of work has been done over the last 16 years. No country has such a gymnastics arena as Azerbaijan does. It is possible to hold any competition at any time in this arena. I have no doubt that international gymnastics competitions to be held in Baku in 2019 will be organized at a very high level.”

Gayibov noted that AGF is consistently included in the best federations ranking of the International Gymnastics Federation (FIG).

“Several years ago, the FIG Executive Committee decided to award the most active federations,” he said. “The federations that hold FIG events, participate in world championships, send applications to international tournaments on time, etc., are considered active. For each of these activities, points are scored, and then they are counted. AGF has been on the list since the founding of this rating, and in 2017, it topped the FIG rating. To become the first among 148 federations is a great achievement, and this is an indicator of the work that was done."

Results of the year

The year 2018 was good and eventful for the European Gymnastics Union, in addition to numerous championships, other events were also held, including gymnastic festivals.

"The UEG consists of eight gymnastic disciplines, and the European Championships were held on many of them," he said. "I would like to mention the European Championship, which took place in August in Glasgow. As part of this special project, multisport competitions were held for the first time, which featured seven sports disciplines. It was a very interesting project, including for TV viewers as well, because they could simultaneously watch several European championships."

"For us, the Championship became profitable because a very large number of people watched competitions in artistic gymnastics, we had very good reviews from TV, and there were many people in the stands," he said. "The event itself was organized at a very high level."

"The Eurogym gymnastics festival was also held in Liege, and an interesting fact was that Queen Mathilde of Belgium attended the event," he added. "It was very nice to see such high-ranking guests."

"Another interesting festival, the Golden Age, was also held, it is organized once every two years, and former gymnasts over the age of 55 take part in it," he noted. "This year, it was held in the Italian town of Pesaro, the atmosphere there was incredible, and the performances of the participants who demonstrated their ability, were presented for several days."

Gayibov added that during the year, meetings of the European Gymnastics Union take place, and they include a session of the presidential commission, executive committee, meetings with the presidents of technical committees.

"As a rule, all events are held at our headquarters in Lausanne, but this time we followed the example of FIG tour meetings, and met in the capital of the Republic of Macedonia, the city of Skopje,” he said.

"In addition, we invited representatives of the countries of the region – states of former Yugoslavia, as well as Albania. We also had the opportunity to talk with them and get informed about the problems of the region."

"In early December (Dec. 2-3), the FIG Congress was held in Baku, and literally the next day after the Congress, the UEG held its last meeting in Baku - a session of the presidential commission, where the year was summed up," he noted.

Gayibov also added that being a member of the FIG Executive Committee, he also participates in meetings of the International Gymnastics Federation.

"In addition, in 2018, at the invitation of the European gymnastics federations and other international sports organizations, I attended various events," he added.

Tough schedule of events for 2019

The UEG president said that this year all gymnastics competitions in Europe have ended, and the European Gymnastics Union is preparing for the next year and the calendar of upcoming events is very tough.

“Qualification has already begun, and three rhythmic gymnastics teams at the World Championships in Sofia and three artistic gymnastics teams at the World Championships in Doha have already received a license for the 2020 Summer Olympics,” he said. “The first qualifying World Cup was held in Cottbus, Germany. Since February, World Cups will start, where athletes will compete for licenses, and then there will be licensed world championships.”

In 2020, licenses will be selected from the continental championships, he added.

“This will take place for the first time, there were completely different rules before,” he said. “The tension among athletes, as well as coaches, naturally increases. The number of competitors will increase next year, because it is already a fight for licenses.”

Gayibov said that the UEG has a number of partners - scoring company SmartScoring and manufacturers of gymnastic equipment Janssen-Fritsen, Spieth Gymnastics, Gymnova and Eurotramp, in cooperation with which important projects are being implemented.

“At the beginning of the year, a decision was made on a development program at the meeting of the UEG Executive Committee,” he noted. “Thanks to our partners, a lot of countries received gymnastic equipment this year. We also announced an educational program.”

“We have ensured that all championships are held at the same level, meeting certain standards,” he said. “Scoring in gymnastics is a difficult process and our partners at SmartScoring provide serious assistance to the organizers.”

“Along with this, we provide live streaming from qualification events of championships that aren’t broadcast on TV, but are interesting to fans,” he noted. “So, viewers have the opportunity to watch competitions and simultaneously monitor the results shown by athletes and comment. It turned out to be quite an interesting resource.”

“We also work closely with the European Broadcasting Union (EBU), said the UEG president. “We made a decision that all European championships will have their own mascot. We hope that this will add certain popularity to the championships, and thus, we will attract even more people to the stands.”

The UEG also tries its best to help federations, both in organizing events and in development, he noted.

“We hold seminars, trainings in all gymnastic disciplines, courses the changes in the rules for judges are explained,” he said. “The UEG does a lot of work, and of course we are pleased with the results when we see a lot of European athletes among winners.”

Speaking of that the UEG Executive Committee decided to entrust Baku with holding continental championships of 2019 in aerobic gymnastics and rhythmic gymnastics, which will be held one after another for two weeks in a row, Farid Gayibov noted that this approach is very popular.

“A good example is Glasgow,” he said. “This is the trend - competitions between sports types are underway. The TV broadcast of the Championship in Glasgow demonstrates that this was done very competently, on time and when other big sporting events didn’t create obstacles. In Glasgow, we were a part of the project, and now we must also resort to this experience.”

“In Baku, we have such a tandem of Olympic and non-Olympic gymnastics, and within a few days the audience will be able to watch both,” he added. “We are trying to make a gymnastics festival. This is an attempt to do something new. Besides, we have already received applications – these are interesting offers from several federations that want to hold 2-3 championships at the same time.”