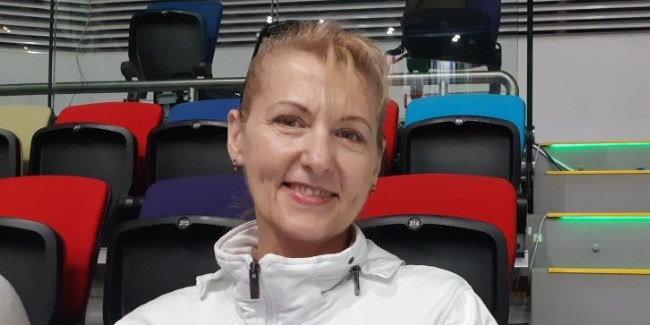 Natalia Vlasenko, who has arrived from Ukraine, enjoys watching the course of the European Championships in Rhythmic Gymnastics in Baku, Trend reports.

"I came from Kyiv, and it is my first time in Baku. I came to the European Championship to cheer for our national team. I really liked the gymnastics arena in Baku, the city is beautiful, and the people are kind. Everything is great!", said the spectator.

Vlasenko said that she will watch the performances of gymnasts from all countries with great pleasure.

"I only wish for our national team to have many victories. Of course, I want to watch the performances of all gymnasts, since gymnastics is developing, especially in your country. I saw the performances of Azerbaijani gymnasts, and I can say that the level has improved and they perform with interesting compositions. I will definitely root for Azerbaijani gymnasts as well," she said.

The first day of the 35th European Championships in Rhythmic Gymnastics is underway in the National Gymnastics Arena in Baku.

The first day will see competitions among female junior teams in group exercises with five hoops.

On May 16-19, the 35th European Championships in Rhythmic Gymnastics will take place in the National Gymnastics Arena in Baku. During the four-day championships, senior female gymnasts will perform in the individual program, while junior gymnasts will participate in the group exercise program. Athletes from 35 countries of the world take part in the Championship.