UNBELIEVABLE BUT NOW AZERBAIJANI GYMNASTS ARE IN GREAT SHAPE! 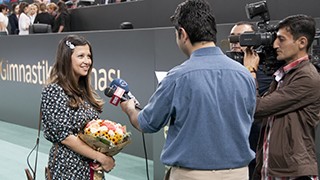 Trend journalist Huseyn Valiyev interviewed the vice-champion of the Atlanta 1996 Olympic Games, the seven-time world champion and five-time European champion, Russian gymnast Yana Batyrshina. She became a guest of honor at the final training of the Azerbaijani national rhythmic gymnastics team on the eve of the European Gymnastics Championship in Baku in 2014.

Yana, by a fluke you are in Baku during the final training. How do you estimate the performance of the gymnasts and whom do you remember most of all?

Yana Batyrshina: Little time was left before the European Championship, to be held in Baku. I can definitely say that the gymnasts are already in an excellent physical condition.

Among the performing gymnasts, I can highlight the Azerbaijani team leader - Marina Durunda. Her performance was incredible. I especially want to stress her light movements.

I would also like to highlight Lala Yusifova. We know that she is recovering from injury. A month is left and I hope she will be able to fully recover. I can also highlight young gymnasts, namely, Jala Piriyeva and Zuleyha Ismayilova, who struck me with their magnificent performances. I think that they will have a great future. Despite their young age, they have the skills and make quite complex elements.

How do you assess the development of rhythmic gymnastics in Azerbaijan? What has been recently changed?

A: I know that the federation is headed by Azerbaijani First Lady Mehriban Aliyeva. It tells its own tale. I can stress the positive changes as a result of the new head coach of the Azerbaijani national team Mariana Vasileva's activity. The Bulgarian gymnastics school differs in a strong component.

This is incredible work with objects, amazing performances. This is not just a set of elements and exercises, but a thorough approach to the formulation of performance, the right moves.

Everything is so perfect that it can undoubtedly be called a mini-show. The Bulgarian school has always distinguished in this regard. Azerbaijani gymnasts have always been strong, but a proper setting and operation was lacked.

I can mention such great Azerbaijani gymnasts as Aliya Garayeva whom, of course, we all remember and who recently completed her career, as well as Dinara Gimatova.

How do you assess the readiness of the Azerbaijani national team for the European Championships?

A: As I said, Azerbaijani team gymnasts are in excellent physical shape. There are only maybe some flaws that are needed to be brought to the ideal. I wish a speedy recovery to Lala Yusifova so that she can recover more and get in shape. It seems it is a little difficult for her. But, nevertheless, she is a great professional and today demonstrated the maximum of her skill. And this maximum is very high level.

We know that you organize tournaments. Tell me, please, does any Azerbaijani gymnast take part in these tournaments?

A: I saw two gymnasts among the performers who participated in my tournaments. They are Gulsum Shafizade and Ruhiyya Sattarova. These girls have taken part in my tournament, when there were not the members of the Azerbaijan's national team. It is pleasant that this year they are already in the national team, on which I congratulate them as well. This is a very big success.

What about the new National Gymnastic Arena in Baku?

A: I have heard that a National Gymnastics Arena has been built in Baku. But when I saw it, I just couldn't believe my eyes. Wow! It just impressed me. I know that there is a gymnastics arena in Kazan, but I haven't been there. And, of course, I have nothing to compare, but I can say one thing for sure that I haven't seen such an arena in my life. This is a complex with lots of training carpets, a hotel and so on. It's just a dream! There are all the necessary conditions to train and perform well.

Yana, tell us about what are you doing now, about your family ...

A: Currently, I am a presenter of the intellectual show for students, 'One against all', on the Carousel TV channel. It is the third year that I hold tournaments. I am a wife and mother of two lovely daughters. Many know my husband, Timur Weinstein, a member of 'Parni iz Baku' ('Guys from Baku'), a KVN ('Club of the Cheery and Resourceful') team. Actually, that's why I'm here. I adore Azerbaijan, Baku, and I feel at home here.

Do you link the future of your children to gymnastics?

A: My elder daughter, Mariam did gymnastics a year ago. But, apparently, this sport appeared too much for her, and she chose a different pastime. She is now engaged in singing and dancing. My youngest daughter Ayla, unfortunately, does not have the makings for gymnastics. I think she should not be tormented. Therefore, she is engaged in dancing, figure skating and drawing.

Will you come to Baku for the European Championship?

A: Unfortunately, I will not be able to come, since the period of the championship falls on summer vacation. Most likely, I'll be on vacation with my children. But, I promise to watch the live streams on the TV and strongly root!...