VALERI BELENKI: “I HAVE NEVER LOST TOUCH WITH MY HOMELAND AND I AM VERY GLAD TO BE IN BAKU AGAIN” 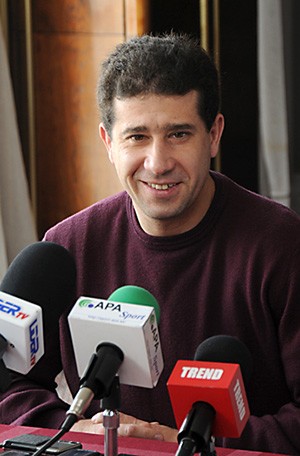 A well-known Azerbaijani gymnast Valeri Belenki, the champion of the Olympic Games Barcelona-92, has come to the homeland - Baku, after a long pause lasted for sixteen years. He came with his wife who works as a sales manager at the world-famous German Spieth Company manufacturing gymnastics apparatus.

He shared his impressions of the city, talked about the working prospects in Azerbaijan and other things at a special press conference.

“How do you like Baku? Has it changed a lot?”

“Yes, great changes occurred in the city. Baku has always been called the pearl of Azerbaijan but it has become a real diamond now. I strolled about the side-streets, squatted down in front of the house’s access door where I lived as we had did with the friends a long time ago, strolled along the boulevard and took the sea air of Baku. I have never lost touch with my Homeland and I am very glad to be here again.

I keep in touch with the Azerbaijanis also in Germany, I assist some of our wrestlers with transferring to the clubs in Stuttgart. I also keep in touch with other familiar fellow countrymen. No matter where I am, Azerbaijan will always remain my homeland. I express my thanks to the leadership of Azerbaijan Gymnastics Federation for inviting me to Baku. And I am very proud that Mrs Mehriban Aliyeva, the spouse of the head of state, is the president of the Federation.

I am very pleased to be in Baku again. The city has really changed a lot.”

“What are you doing now?”

“I am living and working in Stuttgart, training my sportsmen, some of them performed at the European championships in Lausanne recently, where they won a bronze medal. In general, I had lots of offers. There was an offer to work in Japan, USA but I chose Federal Republic of Germany. Initially, I performed within the team of Stuttgart at the club’s level, where we became champions three times in a row. And after completion of my career, I was offered a job by the clubs’ leadership, and I accepted it. Moreover, I am also the director of the World Cup in Stuttgart, so there is an opportunity to invite my friends to my place.”

“And nevertheless, what made you to leave Azerbaijan after triumphal Olympiad in Barcelona-92?”

“Unfortunately, as a sportsman, I couldn’t develop any more here. The facilities didn’t meet the international standard, and I was exasperated when the horizontal bar over me broke into two pieces while I was rising with a spring and I nearly touched down with my head during the training. Thank God, I managed to avoid injury.”

“What is your favorite apparatus?”

“I succeeded in exercises on the pommel horse. I come from the Caucasus, after all.”

“Valeri, what do you think of the development of artistic gymnastics in Azerbaijan?”

“I have visited some of the capital’s sports halls, viewed the sports hall in Sumgayit as well. I also was in the sports hall where I once started my way to the big-time sports. I saw many talented boys but in order to train them to be strong sportsmen, the facilities and base are necessary. By the way, my wife works at German “Spieth” Company manufacturing gymnastics apparatus. And Azerbaijan Federation intends to purchase equipment from this company.”

“We would like to know if you are going to come back to Azerbaijan as a coach.”

“I do not exclude it. At present, I am bound by contract with German Federation and I am preparing this country’s national team for the Olympiad in London. But after the Games-2012, it will be possible to return to this question. And for the time being, an eighteen-year-old Azerbaijani gymnast, Shakir Shikhaliyev, is invited to Stuttgart for period of trainee and he will arrive in Germany in December. He will be training and gaining experience in Stuttgart wit