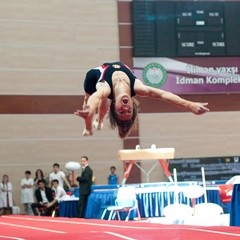 While rhythmic gymnasts were competing on the Apennine peninsula, flying gymnasts determined the world champions on the Balkan peninsula.

Mikhail Malkin, competing in the age group of the 17-18-year-old jumpers on the tumbling track, demonstrated more successful performance in Sofia. According to the results of qualification, he managed to reach the final among the eight best gymnasts. However, Malkin made a mistake in landing in the final while executing a triple somersault and became the 8th as a result.

A second participant of the tournament Aydin Aliyev took the 27th place in the same group in tumbling.

As to the competitions among seniors, Ruslan Aghamirov performed at the World Championship in trampoline for the first time. The debut brought him the 44th place among 90 competitors.