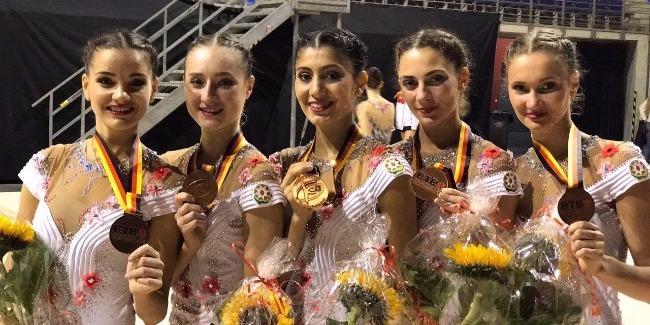 There has come to an end the traditional FIG Berlin Masters Rhythmic Gymnastics World Challenge Cup in the capital city of Germany.

The last weekend turned out to be remarkable for our representatives of the most gracious gymnastics discipline. Thus, Ayshan Bayramova, Zeynep Celep, Diana Doman, Aleksandra Platonova and Siyana Vasileva, represented our country in the composition of the team in group exercises and managed to reach the finals in both routines of the program at the events held on July 7-9. Their performance with 3 balls / 2 ropes brought them the bronze medal in the final stage. The 1st and 2nd places were shared by Russian and Ukrainian gymnasts accordingly. The second final performance was demonstrated by rhythmic gymnasts with clubs. Having received 16.100 points from the judges, they contented themselves with the 5th place. The girls stopped a step away from the medal in the all-around by becoming the 4th.