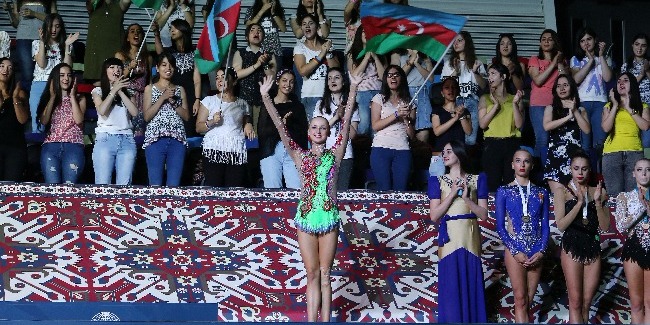 The FIG World Cup Final in Rhythmic Gymnastics AGF Trophy hosted by Azerbaijan come to an end on July 24.

An exercise with a ribbon, which have repeatedly mounted Marina to the podium of the international competitions (silver medal of the First European Games, bronze medal of the European Championships), did not leave her without an award at the FIG World Cup Final as well. Having received 18.500 points from the judges for her final exercises with a ribbon, Marina became the 3rd.

Another Azerbaijani representative participating at the competitions ZhalaPiriyeva also demonstrated successful performances. Zhala, who has been performing on seniors program starting from this year, ranked the 14th in the all-around. It should be noted that the promising gymnast entered into the world ranking for the first time.

The team in group exercises consisting of Siyana Vasileva, Aleksandra Platonova, Diana Doman, Ayshan Bayramova and Elif Zeynep Celep took the 5th places in the finals with 5 ribbons and 3 pairs of clubs & 2 hoops.

A special award ceremony was organized in Baku’s final for the gymnasts and groups taken the first places according to the best 4 results shown in the all-around and on apparatus at 2016 World Cup Series.

In the all-around, Margarita Mamun (Russia) grabbed the Cup of the International Federation of Gymnastics (FIG), while the Russian team received this award for the group exercises. Mamun was also awarded with the FIG Cup for the exercises with a hoop, clubs and a ribbon. The Cup for the ball routine was presented to Aleksandra Soldatova (Russia).

According to the results shown in group exercises with 5 ribbons and 3 pairs of clubs & 2 hoops, Russian and Belarusian teams became the owners of the FIG Cups accordingly.

At the events, the gymnast and the group received the highest execution scores – Yana Kudryavtseva (Russia) and Russian team in group exercises were presented with AGF Trophy Cup prepared by the organizers.

It should be noted that Baku Cup created conditions for the gymnasts to try out their routines on the eve of the Rio-2016 Olympic Games.

Alongside a high-level organization, the events accompanied with great enthusiasm of spectators turned into a gymnastics festival.

Great support and applauses of the audience accompanied every performance demonstrated not only by Azerbaijani gymnasts, but the athletes of other countries as well bestowed them pleasant moments and inspired to perform more confidently.

A magnificent Opening Ceremony, directed by the Head Coach of the National Team Mariana Vasileva, captivated everyone, who came to see the competitions. During the show, organized on the basis of French writer Antoine de Saint-Exupery’s “Little Prince” novella, the colourful performances of the young gymnasts replaced one another and caused the spectators to live exciting moments.

The Cup was also memorized with a number of innovations and differences. So, national ornaments were widely used while designing the Field of Play. The floor and Award Ceremony podium were decorated with “Chelebi” carpets of Azerbaijan’s Karabakh region. Moreover, “Kiss&Cry” corner was designed in national style as well.

The lighting of the field of play was also organized in a different way during these competitions. The light was directed to the floor, thus, concentrating whole attention only on gymnast’ performances.

For the first time in this Cup, the Award Ceremony was held not on the field of play, but on the spectators’ stands. So, it is created a chance for the audience to communicate with the prize-winners.

Another difference is that live orchestra played the national music of every gymnasts’ country during the scoring after the performances in the events final. Each sounded composition excited the spectators, who filled the hall and continually cheered.

It should be mentioned that the scoring system and video control was provided by SmartScoring during the competitions.

The event was also broadcasted live on “İdman Azərbaycan” TV channel. Moreover, the Rhythmic Gymnastics fans in other countries had a chance to watch the events via the live broadcast organized on the web page of Azerbaijan Gymnastics Federation.

The event was concluded with a traditional Gala, where the young gymnasts - the future of Azerbaijani gymnastics performed along with famous athletes. Being the logical continuation of the Opening Ceremony, the Closing Ceremony displayed the beauties of Azerbaijan, made the spectators to think bestowing them pleasant moments at the same time.