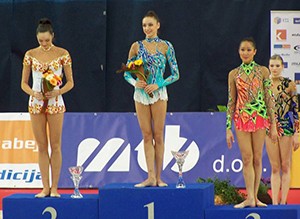 Last week was remembered in gymnastics by Aliya Garayeva’s bronze medal in Slovenia, Zeynab Javadli’s performances in two finals in Greece and the first place draw of two sports societies of the capital in Baku championship in acrobatics.

The World Cup in rhythmic gymnastics took place in Maribor, Slovenia. According to the press service of Azerbaijan Gymnastics Federation, performing in the final with clubs, Aliya Garayeva took the 3rd place (18.25 points), having lost to a Russian Yevgeniya Kanayeva and a Ukrainian Anna Bessonova.

“Having received 18.05 points, Aliya took the third place with this apparatus in a qualification as well,” the coach Marina Govorova says. “I attentively watched her every movement in the final and my opinion coincided with the judges’ opinions – she performed the exercises better and more purely and fairly received more points than the day before.”

In other finals, Garayeva took the following places: the 4th with a ribbon, the 6th – with a rope and 8th – with a hoop. She became the 5th with 71.05 points in the all-around.

The country’s another gymnast Anna Gurbanova took the 13th place in the all-around (65.375 points). 33 gymnasts in all participated in Slovenia.

And the international tournament in rhythmic gymnastics took place in Kalamata, Greece where Zeynab Javadli participated. Our sportswoman became the tenth among 28 best gymnasts in the all-around and reached two finals with clubs (14.175) and a ribbon (14.575). As a result of these performances, Zeynab Javadli took the 7th places. The first four places were shared by gymnasts from Russia, USA, Bulgaria and Georgia.

The Azerbaijani gymnasts’ next stop called “World Cup” to be Portimao from April 17 till April 20. Garayeva, Javadli and Dinara Gimatova, as well as the country’s group team, consisting of Vafa Huseynova, Anna Bitiyeva, Valeriya Yegay, Alina Trepina and Anastasiya Prasolova, will set out to this Portuguese city washed by the Gulf of Cadiz from the south and by waters of the Atlantic Ocean from the west. And Samira Mustafayeva and Sabina Abbasova are going to perform in the tournament among juniors.

Finally, about Baku championship in acrobatic gymnastics which developed into a rivalry of the two sports societies of the capital. A woman’s pair consisting of Afag Maharramova-Parizad Guliyeva from Baku Gymnastics School and their club-mates in a mixed duet Faig Sultanov-Tamara Babakishiyeva became the champions. In reply to this challenge, the representatives of the sports school of Nizami district also became the champions. Emil Yarakhmadov-Elchin Mammadov from the man’s pair and Nahid Aghadadayev, Parvin Panahov, Adil Feyzullayev and Omar Saidov from the man’s group became the best among their rivals.