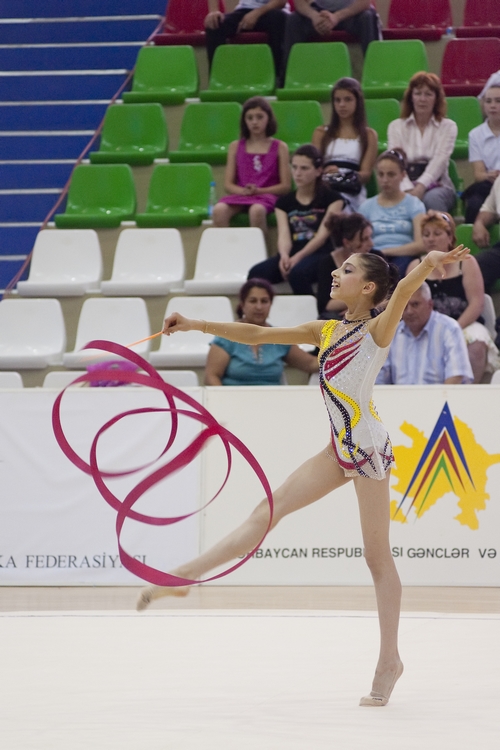 An Azerbaijani gymnast Gulsum Shafizada has become the bronze medalist of the international tournament held in Izmir last weekend.
According to the press-service of Azerbaijan Gymnastics Federation, a 13-year-old junior gymnast from Baku, having acquired a reputation in the qualification, reached the final where won the 3rd place in an exercise with a ball. According to the head coach of the country’s national team, Mariana Vasileva, the gymnast made a good impression with her other performances as well. “Now, we have good reasons to hope for her successful performance at the “AEON CUP-2011” Worldwide RG Club Championships (October 28-30, Tokyo) where she will be presented in the composition of “Neftchi” team, together with Aliya Garayeva and Anna Gurbanova”, the Bulgarian specialist noted.
As to the national team’s leader, Garayeva participated in the “Serie A1” Italian Championship’s first round. Her team “Ritmica Piemonte” takes the 6th place after the round held. And Aliya herself performed with one apparatus – a ball and received 27.325 points. Garayeva’s result was the highest in the team and the second among all other gymnasts performing with this apparatus after a Russian Darya Dmitriyeva. The second round of the “Serie A1” will be held in Pavia town, situated not far away from the world-known city living with fashion, theatre and football - Milan.
And the European Age Group Games in acrobatic gymnastics have come to an end in Bulgarian Varna which is also a well-known city-resort. In the event, Azerbaijan was represented by men’s pair consisting of Murad Mammadov and Murad Karimov.
“We can say that the pair’s debut turned out to be successful,” a judge of international category Irada Gurbanova thinks. “Having executed balance (25.15 points) and tempo (26.65 points) exercises in the qualification, the boys became the 8th, and the pair was the last one who qualified to demonstrate the mixed combination. But they needed a little bit more competitive experience and 0.75 points in order to win the third place. As a result, they became the 4th having taken the lead over the acrobats of the same age from Spain and France, and Russian acrobats became the Champions.