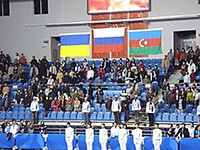 An Azerbaijani gymnast Aliya Garayeva splendidly performed in the pre-Olympics test-tournament held in Beijing.
Performing in the all-round competition qualification among 16 competitors, she reserved for herself a place in the final, having taken the third place and received 68.775 points.
In a crucial part of the competitions, Garayeva received a point higher in total of performances on four kinds of the program and preserved for herself the third place, taking the lead over seven finalists. Aliya Yusupova from Kazakhstan, who won the fourth place, received 67.575 points, losing to her namesake more than two points. Aliya’s points in separate exercises, where no medals awarded, are as follows: a rope (17.525), a hoop (17.5), clubs (17.35) and a ribbon (17.4). Aliya gave the second result in compositions with a hoop, in other kinds - the third. Apparently, Garayeva’s points are stably high, and the stability - is a class index.
“I can’t believe it up to now,” beaming with joy, the bronze medalist said in response to a question of the Chinese news agency at the final press-conference. “This year, which is coming to the end, happened to be very successful for me: I became the European champion, the bronze medalist of the continent and world championships, the Grand Prix final. I hope the success will accompany me next year as well, so I’m going to train more diligently and persistently.”
As to the winner of the tournament, a Russian gymnast Olga Kapranova became the champion (73.825), “the silver medal” was won by Anna Bessonova from Ukraine (70.25). It should be mentioned that the test-tournament was a mirror reflection of the future competitions of the Olympic Games-2008, where medals to be awarded only in the all-round competition in the individual grade in rhythmic gymnastics.
In the competition of group teams, Azerbaijani team, consisting of Vafa Huseynova, Anna Bitiyeva, Valeriya Yegay, Alina Tryopina, Anastasiya Prasolova and Anastasiya Makarova, finished on the 10th place, having received 30.35 points in the double-event qualification. The gymnasts tried Beijing floor on which they should have to perform during the Games-2008.
The press-service of the National gymnastics federation also notes that in the course of performances, our gymnasts were constantly supported by the staff of Azerbaijan embassy in China, led by the head of the diplomatic mission, Yashar Aliyev, as well as by many students studying in Beijing. By the way, they were only foreign fans in the tournament.
The diplomat held a reception on the occasion of Garayeva’s “bronze medal” and presented memorable Olympic medals to all the gymnasts, their coaches and the Federation’s officials. “I wish you to be able to add to the memorable medals also real Olympic ones,” Yashar Aliyev stated.