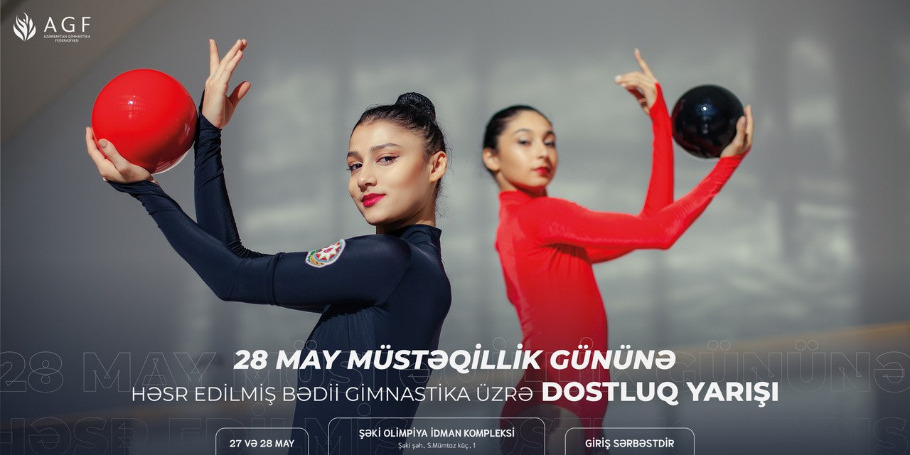 On May 27 & 28, Shaki Olympic Sports Complex hosted the Friendly competition in Rhythmic Gymnastics dedicated to May 28 - Independence day for the first time.
Athletes performed in the Individual program (pre-juniors - 2010-2011, juniors - 2007-2009, seniors - born in 2006 and older) and within Groups (pre-juniors - 2010-2011, seniors - born in 2006 and older).
During the two-day competition, winners were determined in the All-Around & with Apparatus both in the Individual program and Group exercises.
Competitions in Rhythmic Gymnastics were organized in Shaki for the first time. This news caused great thrill among the Shaki fans. Due to the large number of spectators, it was felt that “The Friendly Competition” created a real festive mood in Shaki. The crowd and enthusiasm observed in the regional competition, once again proves, the great interest in sports and gymnastics not only in our capital, but also in our regions.
It should be mentioned that the organization of national competitions, dress rehearsal of our gymnasts on the eve of major competitions, various exhibition performances, as well as master classes in the regions, by Azerbaijan Gymnastics Federation (AGF), has already become a tradition.
In 2011, the 18th Azerbaijan Championship in Rhythmic Gymnastics was held in Gusar for the first time. In 2015, there were organized the 23rd Azerbaijan Championship and 3rd Interregional Cup in Rhythmic Gymnastics in Mingachevir at the Kur Olympic Sports Center.
The organization of the friendly competition in the region aims to develop Gymnastics in the regions, increase the interest and popularity in this discipline.
The detailed information about the results of the competitions is available at www.agf.az.