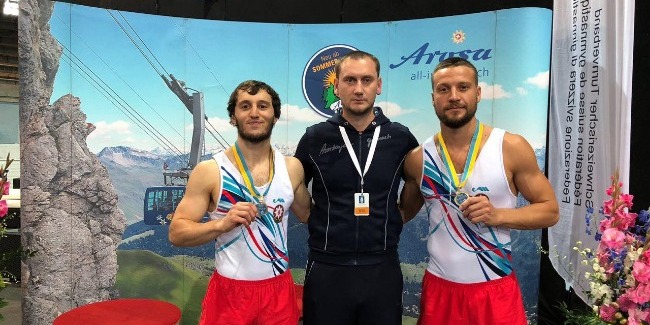 This weekend, the Trampoline Gymnastics World Cup has come to an end in Arosa, Switzerland. The tournament with a participation of representatives from 18 countries including Azerbaijan turned out to be successful for the members of our National Team. Thus, our representatives won the Gold medal within the Men’s Synchro Pair for the first time in history of Azerbaijani Trampoline Gymnastics. Accurate and faultless performance of our pair consisting of Ruslan Aghamirov and Ilya Grishunin enabled the gymnasts to receive 50,050 points in the final. They managed to leave behind all other competitors and listen to the National Anthem of Azerbaijan at the sports Arena of Arosa.

Our young gymnast Seljan Mahsudova performed at the Nissen International Cup held in parallel with the World Cup in the same city. Although our gymnast was qualified for the final from the 1st place, she ranked 7th in the decisive stage of the events due to the mistake made in her performance.

Along with our trampoline gymnasts, our artistic gymnasts are coming back to home with the medals as well. Our representative in Women’s Artistic Gymnastics Yulia Inshina won the Bronze medal of the World Challenge Cup held in Turkish Mersin city by scoring 12.100 points on Balance Beam.  Competing in the finals of Vault and Floor, our gymnast, took the 4th place for both performances. In the final of Uneven Bars, another representatives of our National Team Mariia Smirnova and Marina Nekrasova stopped on the 4th and 5th positions accordingly.

The best result among our representatives in Men’s Artistic Gymnasts came from Dariy Morozov. The gymnast completed his performances on Floor and Pommel Horse exercises by ranking 4th.